View Profile
While our very own eccentric Preity Zinta played the best friend of Salman's character in his home production, Main 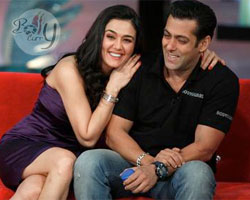 aur Mrs. Khanna, in the song "Happening", seems like it's now Salman Khan's turn to return the favor!
Highly recognized for his "commitments", especially when it comes to his friends, Sallu barely puts in little thought when they beckon, regardless of what he already has on his plate, and manages to travels that extra mile to their side. This time, he's not only venturing in a special song for Preity's comeback project, Ishkq in Paris, but he's also slated to make a brief appearance in the film, irrespective of his already extremely eventful schedule.
For the uninitiated, Salman has also been roped in to shake a leg in buddy Ajay Devgn's Son of Sardar, where he stars alongside Sanjay Dutt, Juhi Chawla, and Sonakshi Sinha; and that too for free! In the past, Devgn also did something similar for Salman, when he shot a cameo for Khan's blockbuster Ready.
BollyCurry wishes Salman and Preity all the best and eagerly looks forward to Priety's Ishkq in Paris!