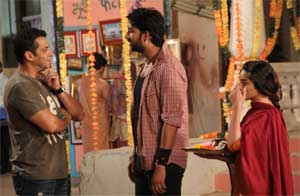 The enigmatic Bollywood star Salman Khan will make his second appearance in Colors' Laagi Tujhse Lagan in the June 1st episode. The actor who had appeared as the corrupt Chulbul Pandey in the show earlier, will now don his latest avatar of the happy go lucky Prem Kapoor, his character in his upcoming flick, Ready.

We hear that Salman will act as the catalyst in the love story of Nakusha (Mahhi Vij) and Deegu (Aadesh Chaudhry). He will make his presence felt when both Nakku and Deegu are in the temple, and Nakku is requesting Deegu to pray. Deegu refuses to take the prasad offered by Nakku, and says that he does not believe in God. To this, Salman gives his gyaan to Deegu and asks him to eat the prasad just as another sweet. He will also talk of the budding love that he can see in the eyes of Deegu and Nakku for each other.

Can Nakku and Deegu realize the closeness they feel for each other?

9 years ago what is this nonsense now, would really love to see Sallu again in LTL, but why with Deggu or Degga whatever they call him. It is just another disappointing episode. good luck creative team, but believe me this show will never be the same as before without Dutta nd Nakku.

+ 2
9 years ago Poor Salman, he came to promote his movie , i am sure he did not knw wht he was promoting in the show , he was encouraging nakku to follow dutta in prev visit now same nakku with another person ,,this is so crappy ,absurd track

9 years ago Yuckkk! Is this what he's coming for ... The last track which he came made some sense bt this one Stupid ...When 'Dutta' is returning why all this absurd tracks

9 years ago stupid and waste of time track, just end this show, without Mishal there is no point continuing this show!!!!!

9 years ago Absurd Track . Foolish proposal .Why Naku should fall in love with Diggu ? She is married to Dutta and still she is in love with her saheb despite of memory lost . Why to force her for another man ?

+ 2
9 years ago Ulitmate comedy - Gyan on what - forget who you are - get going with the next guy who comes along. Wah bhai wha.

karansunnii 9 years ago I think it is good to show Salman Khan on LTL but he shouldn't be giving gyan to Diggu and Naku as Naku has lost her memory so she still loves and thinks about her Sahib so she is unaware that Diggu loves, well, she doesn't know what love is...I like Diggu and Naku. If Mishal left the show it doesn't mean that is end of the show...unfair to others who committed and dedicated actors on the show.

9 years ago Wow, it'd be cool if Salman comes for special appearance :D
Thanks for the update.