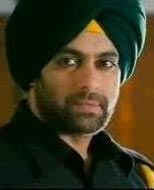 Its seems that turbans are back in fashion. Once it was only a style statement only for Daler Mehndi but now it has been  proudly  sported by Akshay Kumar in  ‘Singh Is King’ and the latest one to join the bandwagon is Salman Khan.

Salman will sport a ‘pagadi’ in Samir Karnik’s multistarrer ‘Heroes’. It is for the first time that Salman will be playing the role of a ‘sardar’. His character is that of a military official in this road-trip movie. Surprisingly when a teaser of the movie promo was shown to a selected audience, people could not recognize him. His new look soon will be the talk of the town. The interesting fact is that Salman did not wanted to stick a false beard so he grew his beard for three weeks thus, making his look more authentic.