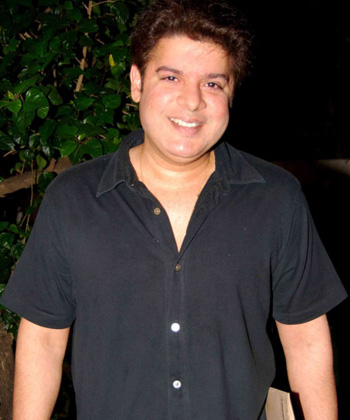 Anchor, actor and director Sajid Khan, who has hosted a string of shows and events throughout his career, is set to return to TV as a host on the small screen.

The director, who is ready with his next film Humshakals, will be doing a special show Humshakal Hasee Housefull, to be aired on Star Plus, said a source.

The show will have the stars of his movie - Saif Ali Khan, Riteish Deshmukh, Ram Kapoor, Esha Gupta and Tamannaah.

While Esha Gupta and Tamannaah will be dancing to the songs from the film, the heroes will do mimicry and indulge in stand-up comedy. The one-hour special will be aired on Sunday.

Interestingly, Bipasha Basu, who is part of the film too, will be missing from the special show due to a personal engagement.

"Humshakals", releasing June 20, is said to be a fun-filled drama.

Sajid, who had initially hosted talk show "Sajid's Superstars" on TV, had earlier said his stint on the telly helped him etch out certain characters for "Humshakals.

"I had this idea for quite some time. Some second and third characters played by the three actors in the film are similar to things I have done on TV. So I was at ease writing them," he said.

coolgirl09 9 years ago i agree wid him completely...
ash is she got a pretty face? is it?
i dnt think so...
anyone had a look on sonam on cannes festival red carpet if dey call ash a pretty face den i think there are no words to describe sonam for sure...

NautankiSaali17 9 years ago i agree with saif completely...he is absolutely right...why do they call her anyways?? does she have a pretty face?? no :S
does she act good??Hell no :S
if showcasing indian cinema and representing bollywood is the reason, i would any day prefer madhuri dixit, kajol or even Rani mukherjee but her naaa...good going saif...!!

lilmzsunshine 9 years ago much as I believe she's not pretty, he was obviously mocking her.

We know the kapoor's don't get along with the Bachanns ever since the broken engagement of Karishma and Abhishek. So obviously Kareen's beau will not have something positive to say about Abhishek's wife.

We know Kareen doesn't like Ash, and so obviously Saif won't. We know Ash doesn't like Salman Khan, and Kareen/Karishma are great friends of the Khan family.

..Roopal.. 9 years ago Not Again...Again media made a very big issue out of a small thing...he just express his views ya...and i too agree with him...She's just getting that chance couz she is pretty...and she is not at all talented couz if talent was the thing considered before inviting then KAJOL may have been the first one to be called...And acc to me ash is not at all a pretty face...SAIF proved he is really having guts and he is really a NAWAAB...GO SAIFU...

baisa 9 years ago actually disgree with Saif.. she isnt a pretty but def a plastic face.. common.. she aint a good actress and neither got tremendous acting akill..
so what kind of woman is she? she is proud to be indian but always but fakes an accent. its so hillarious, she has american accent while in america and british one over here (London)

taral83 9 years ago Finally someone has guts...I would have to agree...I mean what real reason is there for a film festival? to showcase films, not yourself. She has not had any recent hits so again why is she there? As far as I know, I don't think any of her movies were being show cased there right? Well, I think everyone should get a chance to walk that red carpet, and maybe every year instead of just going there to go there, they can showcase one of our hits and send those actors. Its time Bollywood takes their cinema to the next level then dancing around in foreign countries

sonia_92 9 years ago i dont know whether saif was mocking ash or just admiring her beauty but i sure hope he wasnt mocking her! i like saif and ash both, in fact i believe ash is probably the only actress indian cinema has currently who is the PERFECT package! She is an amazing actress, she is a beautiful dancer and she IS beautiful i mean she is the one who has a flower named after her! anyways, saif himself is extrremely talented and i dont think there is any reason for him to mock ash!

As for Cannes, well people dont go their UNinvited, it's obvious she is INVITED and it is a very polite thing to accept the invitation and appear at Cannes, i mean who wouldn't? and the people inviting her are not stupid, they know what they are doing, they invite alot of people form different industries so i am sure they have good reasons to invite her rather than only her beauty and grace, she is talented and everyone knows that!

AlwaysHisJaan 9 years ago lets see how senior and junior bachan reacts to this ... i m sure they have something sarcastic to tweet about saif's comment

psycho_angel 9 years ago LOL...shes not even a pretty face any more...maybe a pretty old face