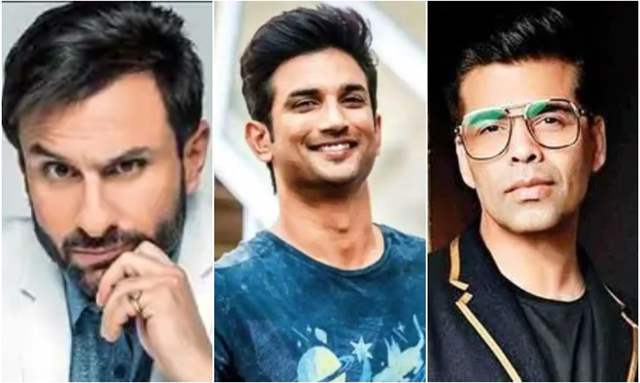 It’s been a few weeks since Bollywood actor Sushant Singh Rajput left for heavenly abode. The 34-year-old actor died by suicide by hanging himself at the Bandra residence in Mumbai.

Sushant’s tragic death has paved way for a boiling debate against Bollywood work culture, nepotism and camps among netizens. Many A-lister celebs like Karan Johar, Salman Khan, Alia Bhatt, Sonam Kapoor among others are facing the wrath of trolls for allegedly mocking the late actor and passing lewd comments.

Actor Saif Ali Khan has opened up against the trolls blaming Karan Johar in connection to Sushant’s death. In an interview with The New Indian Express, Saif was quoted saying, "As far as Karan is concerned, he has made himself a large symbol and because he has put on so many different hats..it seems like he’s attracting a lot of flak for it. Am sure it's not all deserved. The truth is always complicated. There’s much more to it but unfortunately people aren’t interested in that. They are just interested in symbols. He just happens to be a symbol for something at the moment that is not very popular. I hope the tide is over and better things that he is known for like a filmmaker and producer shines through."

The nepotism debate came to the spotlight after Kangana Ranaut made an appearance on KJo’s chat show Koffee with Karan with her Rangoon co-star Saif Ali Khan. In that particular episode, Kangana accused Karan of nepotism in Bollywood and that’s how the argument came to birth.

Reacting to Kangana’s comment on the show, Saif said:

I have no idea what Kangana was saying on Koffee with Karan because I don’t think like that. I mean if you come on to a show and if you've got an agenda prepared to kind of you know take the host down..my mind doesn't work like that. I don't understand. So I was a little surprised obviously. But these issues have absolutely nothing to do with me and I tend to find myself in the middle of them. Maybe I should think sometimes before commenting."

Kangana and Saif starred together in the 2017 film Rangoon, also featuring Shahid Kapoor.

review
Review Shriya Pilgaonkar and Iqbal Khan steal the show away in the ...
a minute ago