SAB launches ‘Comedy Ka King Kaun’ – a comedy show that features 12 of the best comedians vying with each other for the title of the Comedy King. The clash of these titans begins on April 14, 2008, Monday to Thursday at 8:30pm. 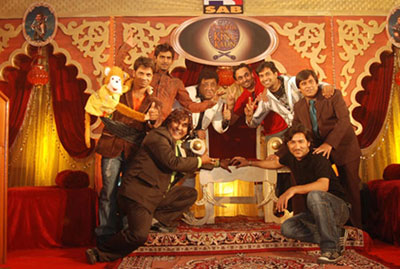 Featured Video
In this one-of-a-kind comedy show, SAB brings together some of the finest comedians such as Rauf Lala, Parag Kansara, Raja Rancho, Salim Afridi, Khayali, Kasif Khan, Gaurav Sharma, Faisal Masood, Ayaz Sanoo, Bhagwant Maan, Aamir Rambo and finally Deepak Raja. Every Thursday one of these 12 contestants will be eliminated until the last one will be crowned Comedy King!

Jaspal Bhatti, popularly known as the Godfather of Comedy makes a comeback on television as a judge on the show. Joining him will be the talented Divya Dutta of ‘Veer Zara’ fame as the second celebrity judge.

Hosted by Sampada Vaze, ‘Comedy Ka King Kaun’ consists of 3 segments – a ‘Stand-up comedy round’, a ‘Jugal Bandi round’ and a ‘Gag round’. The ‘Stand-up comedy round’ will have each participant perform alone, in the ‘Jugal Bandi round’ the judges will select two random participants, who get together to perform on a topic given by the judges and finally the ‘Gag round’ where each team will put up one Gag with the help of a pool of actors.

Announcing the launch of the show, Mr. Anooj Kapoor, Business Head, SAB said, “This show is one more in a long line of our innovative programmes. The unique format and well known comedians make this show hilarious, refreshing and a great relief from the usual fare on television today.”

Talking about the new show "Comedy Ka King Kaun”, Abhimanyu Singh, CEO of Contiloe, says, "When you challenge the best of the best, then we get the very best. The comedians we have chosen are the best of the lot so let’s tighten our belts and get ready for a roller coaster ride. The format is unique it challenges these guys in various situations such as standup comedy, repartee and acting. It is loads of fun mixed with the energy of extreme competition."

Who will be crowned King? Watch ‘Comedy ka King Kaun’ Monday – Thursday 8:30 pm only on SAB.