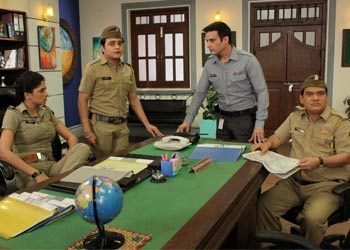 Horror is back in business as unusual paranormal activity leaves the cast and crew of SAB TV's F.I.R. horrified and helpless. While it may be common for Kavita Kaushik aka Chandramukhi Chautala from FIR to face new challenges in her everyday life and solve mysterious crimes in the city, the actress and the other crew members faced their moment of fright, during the recent visit of Bollywood actor, Jimmy Shergill during the promotion of his upcoming horror film "Darr @ The Mall". The film releases in India on 21st February, 2014.
A source from the sets informs us that while Kavita and Jimmy were shooting for their sequence, the main door of the studio suddenly shut and locks. Although the crew and staff tried hard their best, they could not open the door. To add to the chaos, a technical snag rendered the set powerless. The subsequent power-failure rendered the set pitch dark with only the vocal sounds of people being heard.
This created a near panic situation as the enclosed atmosphere of the set started getting claustrophobic. Since the set was sound proof with limited air flow, even the mobile networks were unavailable when the set crew tried to call for help.
Just like the suddenness of the power failure, the power was restored and light was switched on as abruptly and unexpectedly. Even the studio door got unlocked on its own. The biggest surprise however was the fact that there was nobody outside who was responsible for this abrupt chain of events. Truly strange!
While speaking about the incident, Kavita Kaushik says, "Since we did couple of Horror based comedy show in FIR in the past, the idea of promoting "Darr @ The Mall" went off pretty well".
It was an interesting day for Kavita Kaushik experiencing the thrill and excitement during the shoot.
0 Likes

Neeshoe 9 years ago AWWW =)
Love you Shahid ! Muahh
You ROCK!

ffkhan 9 years ago That's why I love my Shahid so much.

He has the brave!

imagine-addict 9 years ago Good for u Shahid. Even Bollycurry tends to promote unconfirmed gossip as genuine news at times. Maybe this should be taken as a lesson by them as well.

zara_11 9 years ago Well, i like the way Shahid is standing up for himself against the media. Love him!!!!!

Krishnaluv94 9 years ago do the press have nothing better to do? it's either rumors or cricket. Get a life people!

aczc 9 years ago they look really fun loving couple.looks so natural,no fake drama.leave them alone.work is important as well as relationship.she is not married with him yet that so she has to fly over for husband's bday.