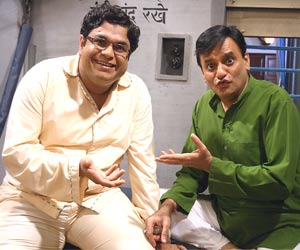 Ever since the ongoing test match has begun, the kids are constantly glued in front of the TV set, the men don't want to work and move away from their seats and the housewives are praying their heart out for the God of Cricket' to score a century in his last debut.

Likewise, Ghotak (played by Paresh Ganatra) and Gomukh (portrayed by Sumit Arora) from Chidiya Ghar are die-hard cricket fans & they have been bitten by the Cricket Mania' too. For them it's Eat, Sleep and Live Cricket. The enthusiasm of the duo has not only cheered their lives but also formed excitement amongst the entire staff and crew of Chidiya Ghar'.

Sources from the sets tell us that whenever Paresh & Sumit get time in between shots, they used to switch on the TV and watch the match. There used to be discussions and debates, amongst them on who will score the maximum number of runs and who will be the star in bowling the oppositions out.

When we asked Paresh of his experience, he says, "Cricket is like a religion in India. When you know the God of Cricket' is playing his farewell test match, all you can think about is to watch and support him. It's a delight to watch him play and will be missed and remembered a lot."

On the other side, Sumit said, "It's hard to believe, that a master blaster is playing his last test match. It was fantastic and exciting to watch the match on TV on the sets, because everyone was charged up and the atmosphere was filled with noise and laughter. It gave a sense of a stadium like environment, which is filled with fun, excitement and thrill. Such moments always lifts my spirits."

In Chidiyaghar the upcoming track highlights the joy and chaos formed amongst the members of the family on arrival of an LCD TV as everyone wants to watch their favorite shows.

Deepika Padukone Arrives at NCB, to be Questioned over ...
46 minutes ago