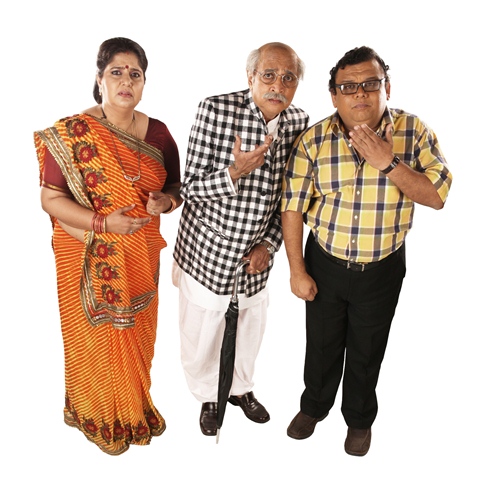 Best known for his creation The Common Man', Padma Vibhushan R.K. Laxman's passing is a great loss to the country and the creative world. His celebrated character, that of a meek and silent common man, perfectly captured the idiosyncrasies of life and politics in India. R.K. Laxman's opinions and thoughts on life as we know it in India not only was immortalised through his cartoons but on television too through R.K. Laxman Ki Duniya.

SAB TV's R K Laxman Ki Duniya which was based on the books and works of R K Laxman, attempted to capture episodes and incidents involving happenings in the life of The Common Man.  The show represented the character's hopes, aspirations, troubles, and weaknesses in day-to-day life as depicted by R.K Laxman over the years. As an expression of gratitude and to honour the eminent cartoonist, SAB TV brings back R.K Laxman Ki Duniya this Saturday from 11:30am to 1:30pm.

Mr. Anooj Kapoor, Senior Executive VP & Business Head SAB TV said, "India will definitely miss R.K. Laxmansaab, his blunt and honest depiction of Indian way of life is what kept the humour alive in daily newspaper reading. With R. K. Laxman ki Duniya, we wanted to immortalise his ideas and thoughts on Indian television too. SAB TV has always believed in presenting our viewers with real, innovative and fresh concepts with a comical twist. His Common Man' series fitted perfectly in line with the content proposition of our channel."

SAB TV is India's leading light-hearted family entertainment channel and the fact that R K Laxman's cartoons was always able to take a light-hearted view of serious issues made R. K. Laxman Ki Duniya a perfect fit for the channel. The series which was produced by J D Majethia (Hats Off Productions)and Dharmesh Mehta (NamanRaj Productions Pvt. Ltd featured prominent artists like Atul Parchure essaying the common man, Vandana Pathak as his wife, Deepak Ghirwale as the retired Sanskrit teacher and many more.

3 years ago It is really a beautiful movie and Ritesh Deshmukh and Genelia D'Souza's chemistry is outstanding in the movie and i like this movie.

+ 7
9 years ago This movie was so adorable, cute, hilarious and aww so sweet. Love Genelia and Ritesh performance they matched each other to the T!!!! Music could have been better but loved the song Piya O Re Piya. I think the ratings could have been little better!!! This movie deserves 3-4 stars, all the actors are in their characters, but this movie is worth watching because of Genelia's energetic performance, and also Ritesh. The couple looks so good together!!!

+ 3
9 years ago Eagerly waiting for this movie.
It looks just amazing!
Looking forward to it.
Riteish Genelia make such a cute couple.
God bless both always!

9 years ago They look so cute together n i lv bth of them...

9 years ago Gosh! just got back after watching the movie...its such an ADORABLE movie...i loved EACH n EVERY moment of it!!!they both r sooo cute togtr and even though the story is usual stuff, the way its taken is AMAZING!!! I left the theater with such a huge smile and i dont see the smile fading away even now!! :D :D :D LOVE LOVE LOVEEE TNLHG &lt;3 &lt;3 &lt;3

9 years ago Genelia I Love U So Much...
u r so...talented actress u r so bold, bindas, energetic,refreshing,sparkling,u r the best!
u r smile is too sweet...love u soo much...