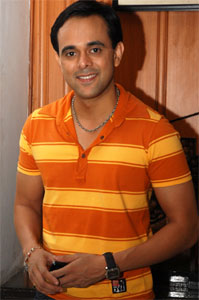 Featured Video
Tell us something about your character in ‘PAANI PURI’?
My character Vikas Puri is a guy who gets into a problem wherever he goes and its fun performing this role. To be very honest the story right now is very simple and straightforward. There are two families where one is a Punjabi family and another is the typically upper class high society family. Their daughter and I, plan to get married, and this is where the comedy begins. But I am not aware of the future track. It is just the beginning where I will be going to girl’s place with a marriage proposal.

How will you differentiate your roles - Sahil Sarabhai and Vikas Puri?
The two roles are entirely different. While Sahil was a straight forward guy who used to keep a balance between his wife and mother, Vikas Puri is absolutely different. Vikas is more about himself with no restrictions as such and its fun playing such a character.

What is your contribution in bringing comedy to the show and how do you feel as you switch back to a comedy sitcom?
Umm well, I enjoy doing comedies because it comes naturally to me and I decided to do this show for a simple reason that I was doing television after a very long time. I feel its better to make people laugh rather than sob all thro’. I wanted to do a weekly show with a good role, good story and good director. In this show, everything was right for me. Slowly and steadily it will be known how it goes along.

Sarabhai v/s Sarabhai is still missed by the viewers. Do you think this show can go a level beyond it?
No, I don’t prefer comparing two shows. When Sarabhai got started, people did not even know what it is all about. People didn’t realize what we were trying to do, whether it was a comedy or something else. Sarabhai was a hit only after two years and that too recently. Each show needs it own space and time to grow.

People may compare this show with Sarabhai v/s Sarabhai. Do you think this will be an advantage or a disadvantage?
No it would be very wrong to compare two projects. The factors common to Sarabhai and this one is the channel Star One and Sumeet Raghvan being part of both. Otherwise, all is different. I would request people not to judge or compare it with Sarabhai but to watch it as something very fresh.

How is it to work with Smita Bansal and the unit?
It’s great. I am working with the rest of the cast for the first time be it Bhavna Balsavar, Shagufta Ali or Sudhirji. With Smita I have done a trailor for Darna Marna Hai where there was blood and murder, but here its comedy which is completely different from it. It’s great to work with Smita as I have known her for a long time and its good getting screened with her.

Can you explain Smita’s character ‘Divya Paani’?
Divya has got some traits and signs of her own. She believes in signs like seeing a pigeon is good, seeing a parrot is good. She loves Vikas dearly and wants him to come to her house with a marriage proposal. This is where the first episode begins. You will get to see how Vikas reaches the house and from there begins all mishap and chaos.

You gained success in the reality show “SHAVA SHAVA”, so do you plan to take up any other reality show in future?
At present no reality shows but, if I get something exciting, I will go for it. However, I am more interested in hosting a reality show. If I get an opportunity it will be great. I prefer taking reality shows compared to daily soaps because I can’t work for 25 days in a month.

Your opinion on the “Saas Bahu” sagas of today..
Saas Bahu ……… its great, people like it and what people like must be good, but I don’t like it personally. I suppose if people find Sarabhai a good comedy, then Saas Bahu serials are better comedy than comedy serials.

14 years ago ouu cant wait for this show..luv the promos thur so cute

14 years ago Saas Bahu serials are better comedy than comedy serials how true!nways luv him best of luck for paani puri!

+ 3
14 years ago Looking forward to paanipuri..Sumit is an awesome actor.

+ 2
14 years ago very very true! lolzz!
He is an Awesome Actor! Luking foward to PaaniPuri!

+ 9
14 years ago Sumeet Raghavan is a awesome actor. Waiting to see him in Paani Puri!!