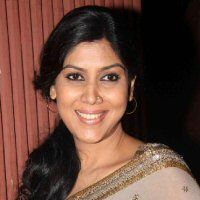 Main Naa Bhoolungi, which is about to start on Sony TV from Monday is all set to see the comeback of Aishwarya Sakhuja who is for the first time coming in a different avatar. She will be seen in a geek look complete with plain clothes, simple hair and glasses.  And now we hear that Saakshi Tanwar who is popular with Sony's show Bade Acche Lagte Hain too will be seen in the show.

Says our source, "Saakshi liked the concept of the show and agreed to be a part of it. She is busy with her own show and is shooting back to back to create a bank of episodes but yet she was ready to do Main Na Bhoolungi."

The show which claims to be a thriller is the story of a girl who dreams of a happy marriage but finds herself in circumstances beyond her control after her arranged marriage. It is an interesting concept and the promos have already created waves and increased the eagerness of the audience. "That is probably the reason even Saakshi agreed to be part of the introductory episode. She will introduce the story and the characters and also play the role of a narrator. As of now she will be seen only in the first episode and whether she will be seen in the later episodes too is something not decided at the moment," concludes our source.

Well, the show surely seems to be creating a buzz even before its launch so get set to watch Main Naa Bhuloongi and be part of the mystery as it unravels.

7 years ago she will rock as always...all the best Sakshi ji

7 years ago ST Rocks!! was wishing that she would have a bigger role to play in the show but, never mind.

+ 3
7 years ago You are very talented sakshi ji..
keeprocking

+ 2
7 years ago two of my favourites on an interesting show. Looking forward to it-------hope the show doesn't lives up to the expectations

7 years ago wow, Sakshi ji will introduce the show.

Hope, She will also play an important role in the show.

+ 2
7 years ago Agree with Noe123. I also thought the idea was copied from Khoon Bhari Maang.

Lets see if it is that.

7 years ago Would only see the first episode for Sakshi. I am not interested in seeing the show.
Glad to see her in the cameo!