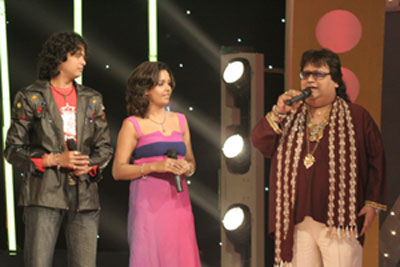 There will be some good performances on Saturday, but unfortunately the spotlight of the episode is yet again on drama and controversies.

The episode opens with Aaditya performing “dil na diya”. Sikander Ali of Josh Gharana is the first participant to perform and he sings “Julie, I love you”. To add a real touch to the song, a call is made to his wife in , and he croons to her “, I love you”! Romantic indeed! Another touching moment of the show was when Sumona Ganguli of Hit Gharana performs; her 4 year old daughter’s photos are displayed in the AV which makes her very emotional.

When it is time for Yalgaar Gharana participants to perform, Ismail Darbar informs all that Wasi is unwell and therefore should not perform today, because a bad performance could mean he is can be out of the competition and as a mentor then he could not be responsible then. A controversy arises among the mentors with Bappida and Vishal not agreeing to Ismail while Himesh gives his support to Ismail. A debate ensues and finally Wasi opts “to sing” and gives a brilliant performance.

The two unlucky ones to get eliminated this week are Sikander Ali of Josh Gharana and Jyoti of Yalgaar Gharana. Jyoti’s elimination raises another big controversy. Ismail Darbar feels that Jyoti’s elimination in this round is unjustified and was a wrong decision taken by the Mahaguru - Khayaam Saab. He also reiterates that last time Sarika’s ouster by Ashaji was wrong and this time the judgement is wrong for Jyoti who had given quite a good performance. Khayyam Saab gets very upset, takes this statement personally and retorts back by saying that Ismail Darbar is insulting him, his musical knowledge and his experience in the industry by making such comments. The mentors should respect his position as a Mahaguru and have faith in his judgement. Ismail ji is adamant in his conviction and it resulted in some very heated moments. Incidentally, in both the controversies about “Mahaguru’s judgement errors”, Jyoti was the central figure! Last time Jyoti’s inclusion and Sarika’s elimination had caused the bad vibes between Ismailji and Ashaji and this time Jyoti’s elimination caused the rift between Ismailji and Khayaam Saab.

Sikander Ali, the other eliminated participant also gets emotional .He states that now he has to start life yet again from the scratch when back in . The mentors console him by saying that now he'll get more recognition because of the exposure that he got on the Sa Re Ga Ma platform, and if Pakistan does not welcome him, he should come back to Hindustan, where he will be well taken care of.

The show ends with Vishal & Shekhar along with the participants singing “pyaar ka bandhan" and dedicating it to Khayyam Saab.

& desigrl27 i duntthink sucks is appropiate, &SRK did a wonderful job =)

+ 2
14 years ago I can think of a few who could have done justice to the role. SRK sucks....duznt deserve to be called King Khan just uz he came in more movies...Aamir Khan, Iqbal Khan, and even Salman Khan act better than SRK acts.

14 years ago wow ! it mustve been a great experiance for her

14 years ago she is nice and lucky to act with shahrukh khan!!!

+ 5
14 years ago Movie is highly appreciated all over......this girls have done fine job

and this girl....known as pretty sabarwal was one the main team players...she was really very good!!

15 years ago This is a competition, why on earth is there so much of a controversy when 1 contestant has to be eliminated(part of the game), anyway i watch the show everytime...