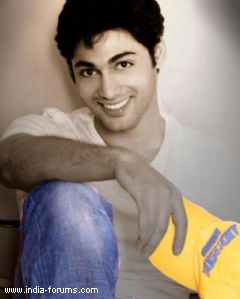 Actor Ruslaan Mumtaz, who has been appreciated for his role in TV show 'Kehta hai Dil...Jee Le Zara', says he has signed a new comedy film titled 'Romeo Idiot Jathani Juliet', which attracted him with its script.

"I have signed a comedy flick named 'Romeo Idiot Jathani Juliet'. I will be playing a role of a boy based in Mumbai who falls in love with Haryanvi girl," said the young actor, who has earlier featured in movies like 'MP3 - Mera Pehla Pehla Pyaar', 'Teree Sang', 'Jaane Kahan Se Aayi Hai' and 'I Don't Luv U'.

He then took the small screen route to connect with the audience and his move has turned out to be a smart one.

"'Kehta Hai Dil...Jee Le Zara' has got me lot of fame and limelight. After doing the show, I am flooded with many movie offers. I am getting more of romantic roles and offers to play comedy characters," he said.

Why did he choose "Romeo Idiot Jathani Juliet"?

"I liked the script and it is the only reason I have signed this movie. I have already started shooting for the film simultaneously with my TV show," he said.

"Kehta Hai Dil...Jee Le Zara", in which he features with Sangeeta Ghosh, airs on Sony TV.

Ruslaan Mumtaz: When 'Yeh Rishtey Hain Pyaar Ke' was offered to me, it ...

My character has a lot of layers: Ruslaan Mumtaz speaks on Yeh Rishtey ...

Sana_168 6 years ago Wow! I am so happy for you Ruslaan, keep rocking in films and in telly-world too! Wish you all the best...Your mind blowing acting is what's making the show so big along with your amazing chemistry with beautiful Sangeeta. You rock RM!!!

-Serene.Rose- 6 years ago All the best Ruslaan.. Keep rocking in film n telly world too :)
You are an asset to JLZ. Loving you as DV

lidvin 6 years ago Congrats Ruslaan Mumtaz for the movie. You and Sangeeta Ghosh rock in ZLZ

lucky17 6 years ago I like his professionalism. Unlike some other actors who leave TV industry when they get the Movie offers, he respects what TV got him. Good work Ruslaan.