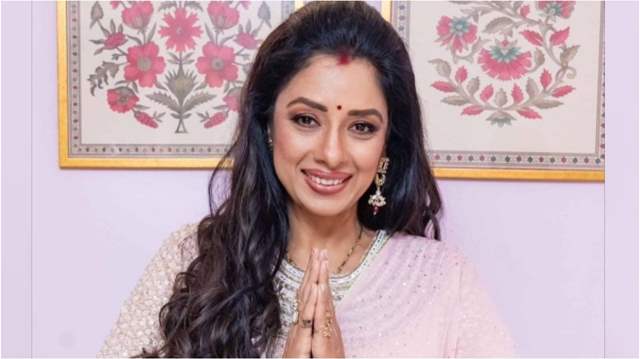 Star Plus show ‘Anupamaa’ is loved by all and it is one of the most watched TV shows on Indian television. Tracks of the show becomes a topic of discussion among many. The show has explored many important tracks which has been loved by the viewers. From Paritosh’s one night stand to Anupamaa adopting a baby in her 40s, the show has talked about many social issues.

In a recent track, Pakhi tries to convince her father Vanraj to be a part of her wedding. Vanraj was angry and upset as her beloved daughter Pakhi eloped with Adhik and got married. Vanraj decided to leave the house before Pakhi’s wedding ceremonies and in order to convince her father, Pakhi sang an emotional song, ‘Teri Laadki Main’. Vanraj gets emotional and hugs Pakhi. His anger melts down and she agrees to attend the wedding ceremonies.

We’ve learned that actress Rupali Ganguly who plays the character of ‘Anupamaa’ in the show, got teary eyed while it was performed. An on-looker said, “Rupali got emotional amidst the scene. She lost her father recently and as the scene spoke about father-daughter’s bond, she started to miss her father”.

When asked about the scene, Muskan Bamne aka Pakhi said, “It was high octane emotional scene and we shot it with different angles and everytime we shot it, I got emotional. Not only me, but Rupali ma’am also got teary eyed remembering her father”.

In the upcoming episodes, new trouble awaits Anupamaa and Anuj as they go on a trip.