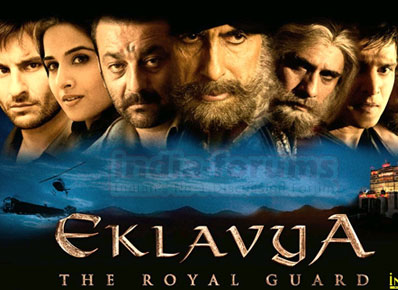 No sooner "Eklavya" got nominated as India's official entry to the Oscars under the best foreign movie category, a wave of protest swept Bollywood. What is most surprising is that even the head of the body that selected the film has reportedly questioned the jury's choice. Director Bhavna Talwar, whose "Dharam" was a strong contender in the category, says that the chairperson of the Oscars jury, Vinod Pandey, had himself expressed his regrets that he called for an open ballot among the jury, instead of a secret ballot.

On the other hand, jury member Sudhir Mishra contends that there was overall approval of "Eklavya" being selected. He says: "I feel "Eklavya" stands a good chance of making it to the top five nominations for the best foreign-language film. And I say this in all honesty. Technically, "Eklavya" is an impeccable film. And it's a very Indian work, too."

The story of "Eklavya" revolves around a royal guard, played by Amitabh Bachchan, who swears loyalty to a princely family like his forefathers had done over nine generations. Directed by well-known filmmaker Vidhu Vinod Chopra, the movie received good reviews from critics, but failed at the box-office. Chopra's short non-fiction film "An Encounter with Faces" was one of the first Indian films to be nominated for an Oscar in 1980. In 1989, "Parinda" was sent to the Oscars as India's official entry.