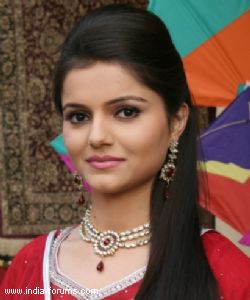 The buzz about Radhika (Rubina Dilaik) breathing her last on Zee TV's Chhoti Bahu.. Sindoor Bin Suhaagan has definitely taken the audience by surprise. But the actress has deeply suffered in her real life after shooting her death sequence.

A little birdie quips, "Rubina was chalked in make up for the death sequence with all the chemicals so that the wounds on her face would seem real. The actress did not realize that the makeup would make her face itch, leaving scars on her face."

Rubina confirms the incident stating, "Initially it didn't click because the makeup was on but after I removed the makeup, I saw some blemishes on my face and also got a few scratches on my hands during the sequence. But as I am on a leave now, I am relaxing and treating my marks."

Though Radhika would make a re-entry back on the show, when asked about the same Rubina Dilaik asserts, "I have no idea about my entry as of now."

We hope that your scars are healed by the time you are expected to enter the show, Choti Bahu!

avinashrubina. 8 years ago heyyy ruby u were really looking cute n lovely...kip it up

Yasmin 8 years ago Rubina, hope you are enjoying your holiday. Please come back ASAP, and bring back some positiveness to this show. Rubina please also bring some "badam" (almonds) for Dev. He needs it very badly, coz. he is confused!!!!!!

sparklingeyes 8 years ago Rubina, missing you in the show a lot.

Budtameez 8 years ago Rubina Dilaik's death scene has not only left a mark on the audience but also left mark on her face!
I hope that the production house's insurance will have compensated Rubina financially, If not, then she should sue the production house!!

Tazzi 8 years ago Rubina we are eagerly waiting for your re-entry in CB...

thisistas 8 years ago we all miss you! but take your time to heal and enjoy your break! we love you(:

Aisha_k 8 years ago missing u please come back soon,,also take care of yourself