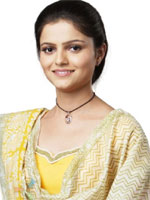 We all marveled at the stupendous performance of Rubina Dilaik and Avinash Sachdev on Zee TV's Rishtey Awards 2010. But few of us are aware of the private battle Rubina had to struggle with, so she can complete the act as per her commitment.

A little birdie present at the venue tells us, "Just hours before Rubina's performance, she got a call informing her about the demise of one of her cousins. This broke her heart and naturally became a cause of concern for the channel and event organizers. Seeing that they cannot arrange for a last minute replacement, Rubina took the decision to complete her act."

The source goes on, "Rubina held herself together until she completed the act and as soon as it was over she broke down backstage. The crew had already made arrangements for her early exit and so Rubina could leave immediately. However, it was sad that Rubina couldn't even afford to wait until the declarations of the category in which she got nominated were announced."

We didn't want to disturb Rubina while she is grieving her personal loss, so we spoke to Avinash Sachdev who says, "Yes, it's true that she got a phone call to inform her about her cousin's demise. I would not like to comment further because it's a very personal incident for Rubina and it wouldn't be right for me to talk more on it."

We express our condolence to Rubina and the bereaved family.

xDoppelgangerx 10 years ago You are simply beautiful and fabulos rubi

xDoppelgangerx 10 years ago Yeah she is an amazing and talented and beautiful and rocking actress!

xDoppelgangerx 10 years ago she is very cute in all ways and sweet ;)

xDoppelgangerx 10 years ago Rubina love u ..u are a very brave and confident actress

Tazzi 10 years ago your hardwork and dedication speaks for itself. Keep up the good work.

MysteryGirl101 10 years ago rubi u r indeed very brave to do ur performance, while having so much going on inside u.
i loved ur performance with avi it was awesome. hope u and ur family r alright now. god bless u. l
love u rubi u rock!