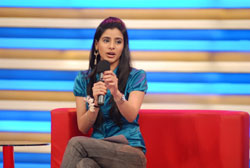 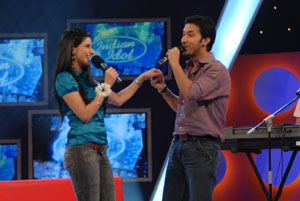 The contestants have a huge fan base following them earning them a celebrity status. And this week in Roobaroo they will get to know how much they are loved by their fans as Mini picks and reads the best among the 20 lakh and odd messages that has flooded the website from the fans. The strong contender of Indian Idol, Amit blushes when he hears to a message from one of his female fan. The cute Chang, who has always had the biggest fan base following, sings a song while Emon requests his fans to vote for him. Anky Baby is not far behind as she is the recipient of undying love from the fans. There are not only fan mails but also marriage proposals. If Puja got a proposal to marry her, then Prashant is not far behind as all the girls among the audience put their proposal to him for marrying them. 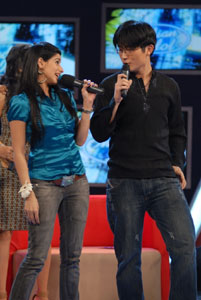 The spirit of the contestants rises when late Vinod Mehra’s daughter Sonia Mehra makes her presence on the sets as special guest. She is a star kid waiting in the wings as she makes her debut in the film Victoria No. 203 which is the remake of the hit film by the same name. Roobaroo without song and performance is incomplete. And this week Emon brings out his synthesizer and together they break into the song. Even the normally reticent, Amit wooed Sonia with a song Doori sahi jaaye na!! Sonia is pleased and went home as a happy girl as they all sing together “You are My Sonia”!


With song, dance and music Roobaroo is a must see this week in Indian Idol. Don’t miss out to watch it on Thursday 16th August, 2007 only on Sony Entertainment Television.

15 years ago Oh, this looks like a really good episode of Roobarboo! I hope Sonia will be lucky enough to make it in Bollywood, poor girl that will be really hard. Ahh, Emon wants the audience to vote for him...I wonder why he sounds great. Poor Widdle Darling!

15 years ago Seems interesting, will definitely watch it!

15 years ago thnx.. donno who she iz but sounds like a fun epi =p

+ 3
15 years ago can't wait either! :D sounds like another great Robaroo!