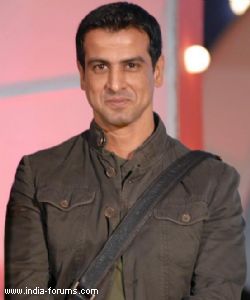 Ronit Bose Roy who is popular today as the intelligent and diligent lawyer, K.D. Pathak of Sony TV's Adaalat has lately been in the news for a wrong doing. He has been trapped in an unexpected issue.

A source says, "Ronit was arrested by the Mumbai Police early this morning for rash and negligent driving. He has apparently hit a 56 year old woman who is presently admitted in a hospital."

We tried calling both the brothers, Ronit and Rohit Roy, but they were unable to reach.

Wistfulness 8 years ago We are his fans but we too have full sympathy for the family. I don't understand that why you guys are just taking an advantage and bashing him. He took the family to the hospital and wasn't drunk. If anyone saw him drinking anywhere then you're free to say. This accident occurred due to speed and usually people run away but he didn't!

xxMATSxx 8 years ago U know what... what happened was obviously wrong. I am a HUGE fan of his, but Im not going to support what ever happened. HOWEVER, i do not know under what circumstances the entire incident happened. If it was an ACCIDENT, then i mean things happen. Im sorry it did but, theres nothing we can do about it. If it was PURPOSFUL and careless ness then, im sorry that Ronit Roy has done what he has.

nsonia95 8 years ago i am a big fan of hiss show adaalat
hope he gets his bail soon n see him in the show, and the old lady to be perfectly fine too!
wish every1 a very happy diwali! :D
thanks for the news :)

wisehigaholic 8 years ago im no a big fan fan of him but i love his show and his assistant :) lol now im so definitely not his anymore but i like his assistant im watch for him lol

LimitLessFan 8 years ago Fans should know where to draw lines when they are supporting their FAVS...

Wat he did was wrong ,he was driving way too fast , that mess of his car is enough proof

Hope the victims family is doing all well, and they get better soon

First time really irritated with this writer , who is feeling bad for Celeb who is a culprit and nothing not a single line on the old lady who is badly injured ... wow

HaHaHeHe-Hupp 8 years ago Nagger , i think that you are only one to know that he was under influence of alcohol during hitting that car . i also having full sympathy for that lady and her entire family and what happened with her is literally bad but making absurd remark on Ronit Roy is far more bad than that!!!!!!


Nagger , instead of creating mids to keep Rati,Dhrasti and Gurmeet in top ten , try to read recent article related to ronit roy. senior cop appreciated him to take that lady to hospital...
Guys , before uttering crap about anybody, read what is veracity about that person .. making absurd remark on anybody makes one ignorant ..

negative comments in this article state about how much members in this site being jealous of Ronit Roy and his popularity.. reason is obvious he is much more richer than their favs while their favs are nothing anywhere around him!

HaHaHeHe-Hupp 8 years ago person whether star or non star , can make a mistake in his life and only that person gets free sooner who having much money( for which being star is not required) and even a penurious person gets free but bit late and as last to last day Ronit Roy's car collided with other car , that was just an accident not occured intentionally.. naggers who hurling negative remarks on him , spare your time to type posts on your favs when they will get accused in any case in future !!!!


Naggers , yeah i also think that he should be punished for his indeliberately accident but should not get big . atleast he is better than those leaders\males who use adolescent girls to quench their thirst of S**, they do that deliberately even though they never get punished for his ulterior acts why should Ronit get big while he was not in drunken state that time..I m not saying that i m not sad on incident occured .. I m extremely sad for both who was arrested and who got mangled badly . May God protect that lady every second in hospital!!!!!!!

pallavi25 8 years ago Watched the news today on TVAsia, Ronit did not run over the lady. His car crashed into the other car, at a right angle, the other car spun around and 3 passengers in the other car were injured, one of them is the mother whose injury is most critical, the other two are the father and brother, the sister is doing fine, she gave the interview on TV. Ronit was arrested but out on 12,000 bail while police are investigating the case. It appears he wasnt drunk but he WAS speeding which caused the 2 car crash!

Dabulls23 8 years ago Wonder if he was under the influence of alchohol or drugs...