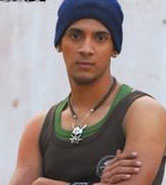 Ayaz Ahmed, the black belt holder in Thai Kick boxing who was part of Roadies 5.0 is all set to make his debut in NDTV Imagine's Kitani Mohabbat Hai, produced by Balaji Telefilms.

We talked to the young lad who said, "I play a rich spoilt brat, Arnab who has good looks and is charming. Girls fall for him the moment they see him, but he is cunning from within. My character is similar to Akshaye Khanna's role in the movie Humraaz, who loves the girl but uses her emotions for his own benefit".

"I will be cast opposite Sur (Sonam Mann), sister of Aarohi. I don't have much idea on how the track would proceed, but I enter in tonight's episode", adds Ayaz.

Ayaz who is from Kolkata had been busy with his studies soon after his stint in Roadies ended. "I got lot of offers, but could not take up anything as I was studying", he concludes.

Gudiya’s detective mode on: Who is the new guy in her town?

-KingAragorn- 11 years ago Good one, Ayaz! :) I hope you have learned to respect women by now. Otherwise your life will become a Kekta serial very soon :) jokes aside, good luck dude!

samiya. 11 years ago OMG Sur love track...why can't we see why Arjun goes to jail first? then they can start Sur's love story...

-Jwalamukhi- 11 years ago Hmm..does then mean that we can see a Humraaz track between Aman -Sur and Arnab?

r07c 11 years ago I thought Ekta was going to get Sur married to Aman and Antara with Nikhil :S

sayanti_ashiuv 11 years ago saw him yesterday...he was thikthak in his charector...but as hez doing acting 4 firsttime in balaji camp he will improve in coming episodes for sure...good luck ayaz....