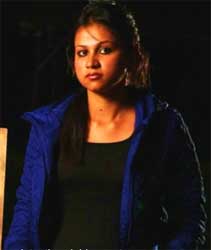 After the heart piercing tasks and intense pressure, the battle is all set to come to an end in MTV Roadies 8 as it has got its winner.

A source says, "This year Anchal Khurana, the twenty years old girl from Delhi is crowned the Roadie of this season. Out of the 13 contestants who took off their journey, three dare devils made it to the finals which included, Suchit Singh, Anchal Khurana and Mohit Saggar."

"The finalists had to undergo two important processes to win the title. First to win the assigned task; second, to convince their once opponents and also the ex- contestants of Roadies 7 to vote for them."

Well, Anchal seems to have crossed both the paths and made an obvious win.

Well, finally MTV got their Roadie who made way to the Shortcut to Hell.

Roadies LIVE audition finale to be simulcast on VOOT, Twitter, ...

hereIam 9 years ago ha ha ha...Aanchal tum jeet ke bhi haar gayi ...Loser!! Everyone voted FOR u not coz u deserved that ..coz they pitied on u... LOSER!!!! U should be ashamed of urself.
And Mr. RAGHU, U lost your one viewer now.
Guys, please don't join the ROADIES OFFICIAL FB PAGE!! It will be the disgrace for us now if we become a part of such thing!!

ARian_4ever 9 years ago she became the winner out of sympathy, not because she deserved it, but because she was a girl

rishabjain2 9 years ago anchal d winner lolzzz...d biggest joke ,, guyz send dis as a msg to ur frndz dey will laugh alot...
i think it fake,,,,rodies is fake i think now

mehreen. 9 years ago One word: Disappointed.

Where Suchit should have been standing we have have Anchal there? O.O... i mean really wtf? i'm still in denial =/

RashiGT 9 years ago @Rajin90: Very well said. I absolutely agree with each and every word U said over here!!

hereIam 9 years ago I seriously didn't expect this crap from RAGHU who always claimed himself a very good judge of talent and hard work!!! Aanchal doesn't deserve the crown ya!! Henceforth Even I am not gonna entertain myself with MTV's reality shows!!!!!

medico_gal 9 years ago first that no good Priya won Splitsvilla 4 and now the equally undeserving Anchal won Roadies 8...MTV really made fools out of all its viewers...I'm not gonna watch anymore of MTV's reality shows from now on...