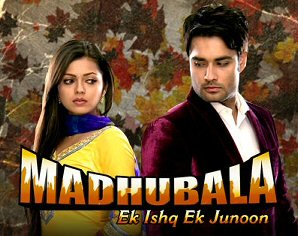 High voltage drama to be seen in the upcoming episode of Saurabh Tiwary's Nautanki Films Productions popular daily soap Madhubala - Ek Ishq Ek Junoon.
In the previous episode of the show we have seen that there is a lot tension brewing in RK's (Vivian Dsena) life, as he has recently met with an accident which has made him paralyzed and due to which he cannot do things as he used to do before. As we know that he is producing a film and is acting in it, but certainly he cannot act anymore.
Updating about the upcoming episode of the show our source says, "On the sets RK starts feeling  irritated as he is unable to do things on his own. In between Deepali (Seema Mishra) instigates him against Madhu (Drashti Dhami), on not focusing on her responsibilities towards home after having bagged a full time role in his film, which makes RK even more angry."
Furthermore in the storyline of the show we will see that RK is under pressure on what will happen about his movie, "There is pressure mounting on RK from the bank officials who are on the verge to stall his film. Looking at the same he is very furious and tensed on what will happen ahead and how will he get through this phase."

Madhu is too tensed over the situation and sad to see her husband RK in this situation,she  comes up with a suggestion, "Madhu tells RK that the only way to complete the film will be to make it heroine centric, so that the entire focus will shift on the heroine and he doesn't have to worry about the movie then."

Will RK go ahead with Madhu's suggestion? Will he make his movie a heroine centric? To know more about the upcoming track keep reading this space.

preetydipu 7 years ago Drashti Dhami u r excellent as Madhu and Anmika...

blossombulbul24 7 years ago love you watching Drashti,But due to present track iam not watching Madhubala

VenusGalDrashti 7 years ago Love you my angel Drashti Dhami

MyLifeisGeet 7 years ago You are angelic sweetie pie Drashti Dhami