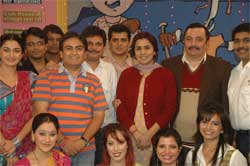 The evergreen fun loving actor Rishi Kapoor recently had a tough time with the media on the set of SAB TV's popular show Taarak Mehta Ka Ooltah Chashmah. Rishi who had come with wife Neetu Singh for the promotion of their upcoming movie Do Dooni Chaar had his task cut out, as the couple visited Gokuldham Society to learn garbha from Daya.

Our source from the set tells us, "Rishi did not like the flurry of questions thrown by media on Ranbir Kapoor's personal life. The actor literally ordered the creative that he will shoot only if the media was shown the door. The unit people then manage to put the media out and continue with the shoot".

However, after getting done with the shoot, Rishi and Neetu Singh did entertain the same media and helped them with bytes. Guess it was the 'asar' of shooting with Dayaben that softened the actor!

binie 9 years ago would love to see them in TMKOC.. one of my most faviourite celeb couple..... why media is asking about Ranbir's personal life to them.... media needs to drag line somewhere!!!!!

smallwonder 9 years ago They want the best of both worlds - they want to be famous, the want to be loved by people, they want to be treated like deities. But when it comes to giving back something to the same people - No No, Please dont ask personal questions, we are also humans lol... Who forced you to be a celebrity, is this not a part and parcel of being one? If you want to savor and devour the fame and limelight, you have no justification and right to stop people from wanting to know more about you - its their right!

Ishan. 9 years ago lol ... That's the disadvantage of being the father of a famous celebrity !!

Will be waiting to watch them in TMKOC !!

yipee 9 years ago no one likes being questioned on personal life...its natural he reacted

brainychild92 9 years ago go rishi.. thats how i'd do it too. media in then im oout!!lol