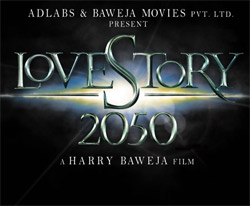 It’s a beautiful dream for those who love living in the dreamlands only; but what about the audience who are quite bored with repetitive Bollywoody love stories!

Karan Oberoi (Harman Baweja) is the only son of famed businessman Mr. Oberoi (Dalip Tahil). Karan is not happy with his father as because his father is more interested in cars, business and achievement than his only son. Being very lonely and having the thought in mind that his unfortunate accidents would bring no loss to anyone, Karan always prefers to play with danger. In the course of the mundane story, Karan meets Sana (Priyanka Chorpa) and for obvious reasons (love, I mean to say) they decide on getting married. And here comes the twist. Sana meets an accident and she dies leaving Karan all alone.

On the other hand the Love Story has Karan’s uncle, Dr. Yatinder Khanna (Boman Irani), who by profession is a scientist. Dr. Khanna has been working on a time machine for last fifteen years so that he can poke into the future to how the things will change (obviously).

Karan meets Dr. Khanna and recapping Sana’s dream about entering the year 2050, they go to the year 2050 with the time machine. Entering the future Karan comes to know that Sana is now the best rock-star of the world living in Mumbai and is named as Zaisha. Ultimately Karan succeeds in getting his love, Sana alias Zaisha, back to the present with the help of QUTY and BOO, two robotic dolls taking care of Zaisha.

Harry Baweja has beautifully taken care of direction as well as the story but at some places the story becomes little slow. Music and lyrics of the film looks nice but at the same time it appears little difficult to say that songs will look something like that with flying cars in the year 2050. Priyanka has worked well in accordance with her character. Whether Harman’s resemblance with Hrithik is a bane or boon is a quiz immaterial but his impact on the screen is quite impressive. Boman Irani has depicted his character quite well. Archana Puran Singh looks good in her chara 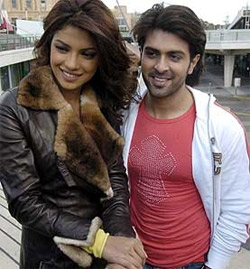 Coming to the much hyped special effects, Harry has proved it a mark in Indian film history but it’s quite difficult to say whether the world, especially Mumbai, will look somewhat like that in the year 2050. This possibly is the first Indian film that marvels in special effects and people seem really amazed but at the same time few people are inclined to believe it a copy of some Hollywood flick. Being neutral it’s better to buy both the opinions. One funny thing is, even in 2050, corruption remain our inseparable characteristic. On the other hand the robot snake shows the fatal future of today’s reptiles (?).

QUTY and BOO show the great creative status of the director but the size of BOO is little small than what people have expected it to be. The film, flaunting a budget of fifty crore, must have earned a cool amount from Lux and Lawman. At the same time, the brand owners must be feeling good thinking about how their brands will be famous among stars even in 2050.

Well, it’s time to say adieu to you all but before signing off it’s better to say that you must watch the film once to witness Harman’s acting, special effects and not to forget, Mumbai in 2050.