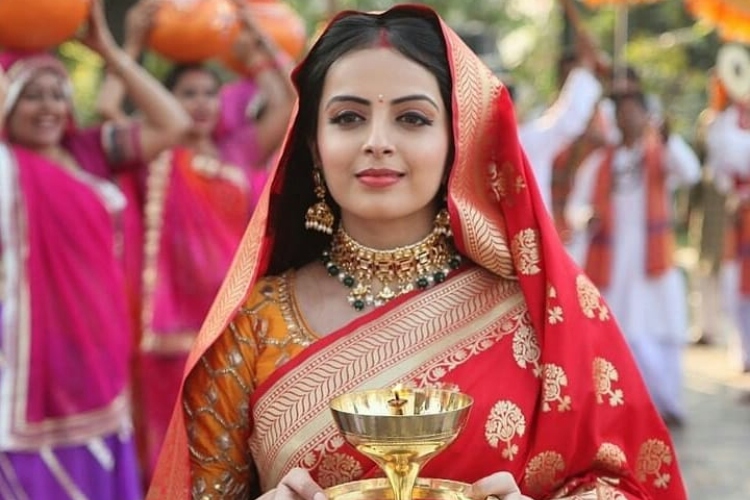 After Helly Shah's Sufiyana Pyaar Mera, another show went on air yesterday. And we are talking about Star Plus' Ek Bhram Sarvagun Sampanna starring Shrenu Parikh, Zain Imam, Ayub Khan, Ishaan Singh Manhas and others. Earlier, it was supposed to go on air on Star Bharat and was titled Meri Biwi Ka Sasural. However, the makers decided to shift it to Star Plus. Since the first promo went on air, the show has created a buzz as Shrenu will be seen as the antagonist in it. The show features how an ideal bahu is all set to destroy her in-laws family with some ulterior motive. Although the motive of her revenge is not known yet...

What is the story about?

The show starts with a mysterious package being delivered to Mittal family. While everyone is eagerly waiting for Kabir's (Zain Imam) return after 6 years, the family has also decided to plan his surprise engagement with Janvi's (Shrenu Parikh) sister, Ishani (Tina Ann Philip).

Janhvi is the ideal bahu of the family who performs all the rituals. However something or the other fails and the rituals remain incomplete. Janhvi seems to enjoy this incompleteness. Meanwhile, Prem Kishan (Ayub Khan) receives a doll head curved his face with a bullet stuck in its forehead. Everybody starts panicking but PK calms them down. Suman (Purva Parag), PK's wife is seen to be a little startled with everything going on and PK also neglects her. Janhvi tries to show that she is supporting her mother-in-law however she enjoys the latter's misery.

Finally, Kabir arrives. When Janhvi and family goes to welcome him home, Kavya (Tanvi Dogra) enters the house with her son, Aarush (Vidhaan Sharma) as Kabir's wife. The entire family is startled.

The show starts with a suspense that the makers have been promising since they announce it. There are many layers of mystery. From Janhvi's ulterior motive to the threatening parcel of PK and Kabir's marriage with Kavya - all of these will make you eager for the next episode.

The precap also reveals that Kabir and Kavya are hiding a big truth and we wonder how will Janhvi find it out. Cinematography of the show is extremely impressive as the sets are well established and the entire setup will give you grand feeling. The stellar cast is what the audience will look forward to.

Shrenu as Janhvi is the show stealer. Her expression changes are flawless and adding up to the mystery. While everybody has loved her cute innocent and comic side in her shows, she marks her ground with this negative shade. Indeed, she has nailed it.

There was hardly anything to dislike in the show. As the show has just started the presentation was quite flawless and crisp and left no scopes of disappointment.

If you love thriller then this show is a must watch. While the small screen is cluttered with supernatural shows and dramas, this suspense-thriller will make your inquisitive mind sharper. Shrenu's negative stint will compel you to watch the show again and again. It seems every episode will have a new tale and we so wish the makers stay true to the plot and not diverge from it. If they do it, then the show is promising enough to hit the chords of the viewers.

*Dev.* 1 years ago Ayub's acting is comical. Shrenu's character failed to tell why she behaves she has some disorder of negativity all the time by changing her expressions. Big sets just to grab viewers and of course a grey character can behave rudely with the child in the second episode. What nonsense is this kind of content. Seriously.

Bharathi_gurti 1 years ago This is not a thriller show.this is the remake of the Tamil show ANANDHAM..soon this will turn into a chaos. But it has a gripping storyline.but definitely not a thriller.

Suada 1 years ago I can still understand why shrenu choose this show... but what made zain to choose it is beyond me... especially after the huge success of Naamkaran

MereMahiyaa. 1 years ago Shrenu Parikh you are a amazing actress first episode met all my expectations.

BeyondHorizon 1 years ago Shrenu has definitely nailed it and though the story does have its moments, some aspects were totally OTT like the mother in law. Personally found her over the top like a typical saas. I know it's too early but hope makers focus on main plot n not digress it.

Riana31 1 years ago First episode was excellent !! Those who watched or read thrilling content they will understand how much amazing it is too see a tulsi-parvati-gopi type bahu into a grey woman with flawless shades !! Shrenu nailed it !!! Cinematography was dimm and perfect for its content... Clothes were on point and the best part was shrenu's bgm... Mindblowing creation by music artist !!...

Maga_am 1 years ago So much waited new show of Shrenu Parikh. And the first episode met all my expectations.

CrazyLtlBitch 1 years ago Watching Shrenu Parikh in a strong negative role is a bliss... Shrengel is doing great...

Adtiya Thackeray Denies Any Connection With Sushant Singh ...
49 minutes ago