Remakes are far from a new phenomenon in Bollywood. You could call it a lack of creative thinking, or simply a love for the legendary films that were made before, but even though we know the end of the story in most cases, remakes contain a certain essence that leaves us mesmerised.

And so today. BollyCurry takes you on a tour of the grandeur displayed in one such remake. 2002's Devdas was the third film adaptation of Sharat Chandra Chattopadhyay's novel of the same name. Before this, K.L. Saigal and Dilip Kumar's adaptations of the novel had set high benchmarks in all departments. Sanjay Leela Bhansali made an ambitious call when he chose to remake it. This choice proved to be a fruitful one as the movie was declared a blockbuster hit, and was included in Time Magazine's top 10 movies of the millennium worldwide. 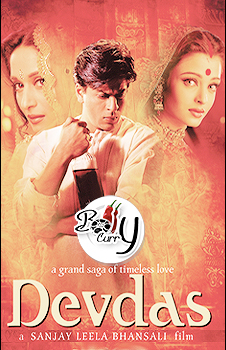 The magnum opus was released on 1st March 2002, and starred the baadshah of Bollywood Shah Rukh Khan as the title character. Sharing the screen with him were beauty queen Aishwarya Rai Bachchan and dhak dhak girl Madhuri Dixit Nene. A company of veteran actors such as Kirron Kher, Smita Jaykar, Jackie Shroff, Ananya Khare, Manoj Joshi and Apara Mehta rounded up the cast. This made a film well worth all money spent on it, and it should be no surprise that with all that talent, it was also screened at the 2002 Cannes Film Festival.

The story revolves around the male protagonist Devdas Mukherjee, played by Shah Rukh Khan, who is the son of a rich landlord. The film opens with his return home from London, where he had been studying for ten years. While his mother Kaushalya (Smita Jaykar) eagerly waits to see her son, pledging to be the first person to see him, Devdas heads over to his neighbour and childhood friend's home, wanting to meet Parvati, nicknamed Paro (Aishwarya Rai Bachchan), who is also eagerly awaiting his return. This sparks jealousy in Kaushalya, who knows how close her son is to Paro and her mother Sumitra (Kirron Kher), and sets the chain reaction for the rest of the plot's unfolding. On one side, the tussle of class differences keeps the supporting cast busy, the other side sees the budding romance between Devdas and Paro reach the level of promises. The momentum for high voltage drama rises when this love story gets noticed by all. Devdas' sister-in-law Kumud (Ananya Khare) poisons Kaushalya's mind against Paro and her family as they belong to a lower class, resulting in Kaushalya rejecting Sumitra's proposal of marriage for their children. Humiliated and full of vengeance, Sumitra vows to marry off her daughter to a family richer than the Mukherjees within seven days. Paro is burdened by her duty as a daughter, and accepts her mother's decision. Thus begins a journey of heartbreaks.
Devdas leaves his house in anger and ends up at a brothel where alcohol and a college friend Chunnilal (Jackie Shroff) become his companions. A kind-hearted courtesan Chandramukhi (Madhuri Dixit Nene) becomes a balm to his melancholy and sorrow. Devdas travels through realms of pain and falls into a debauched lifestyle, before coming to a devastating end.
Devdas was a movie where a lot of expectations had taken birth before it even hit the screens. The film was not only under pressure to perform as well as its predecessors, but also a lot of business was riding on it. Oning to the brilliance of Sanjay Leela Bhansali's visualisation, the remarkable acting by the whole cast and supported by the glorious cinematography and the alluring sets, it was a small thing to attain the tag of a blockbuster, even being one of the most expensive Bollywood films ever produced, with a reported budget of Rs 500 million.
Adding to the charm of the masterpiece was the music. A mix of Indian classical and retro tunes, the music of Devdas is, to this day, still a collection of wondrous work. While the album was chiefly composed by Ismail Darbar, Birju Maharaj and Monty Sharma composed a song each. Who will ever be able to forget the vision in green as she danced to the semi classical 'Maar Daala', or the saga of a lovers quarrel enraptured in 'Bairi Piya', sung beautifully by Shreya Ghoshal in her debut as a singer. Another very popular song is the tale of anticipation in waiting on a love, beautifully captured in 'Silsila Yeh Chahat Ka'. But the crowning glory of the album is the festive 'Dola Re Dola', which brought two of Bollywood's most beautiful actresses on screen together, matching step to step, with a visual outcome that was absolutely stunning.

The film also garnered many well-deserved accolades. Devdas was India's entry for the Best Foreign Language Film at the Oscars in 2003 and was also nominated for the BAFTA Award for Best Foreign Language Film in the same year. The film won ten awards at the 2002 Filmfare Awards, including Best Film, Best Actor, Best Actress, Best Director and Best Supporting Actress. Devdas also won five awards at the 2002 National Awards, the National Film Award for Best Popular Film Providing Wholesome Entertainment being one of them.
Did You Know?
The 2002 adaptation of Devdas came in an era of masala movies as a breath of fresh air, even though the film had emotions running at boiling point. From being a remake to becoming a cult, Devdas was never just another movie, but a craft where everyone gave a piece of their soul to bring this piece of art to life.

Writer: Nabila S.
Editors: Aradhna K. and Gunia K.
Graphics: Nabila S.
Do you have a suggestion or comment for BollyCurry? Drop us a PM at BC_Dropbox today.