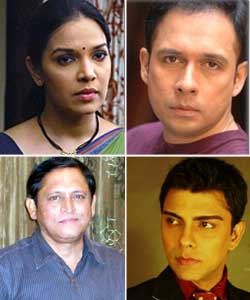 A new show Khamoshiyaan co-produced by Trilogy and actor Shakti Anand's production house is expected to hit the screens soon. The buzz about Mohit Sehgal featuring in the show is also spreading like fire. But the latest development to the show is the inclusion of renowned names in the cast.

Talking about the characters the source revealed, "Tushar Dalvi will be playing the eldest of the three brothers and is paired opposite Resham Tipnis whereas Shilpa Tulaskar will play Abir Goswami's wife who is the middle brother. Ravindra Laxman Mankani will play their father and hence will be the head of the family."

When contacted Tushar Dalvi he says, "We have just shot a pilot and I am essaying character which I have never played before and this is only something which can be revealed at this point."

Resham Seth and Shilpa Tulaskar remained unavailable for their comments.

+ 3
9 years ago Mohit pls come back soon!! and we miss seeing u and Sanaya together... please give us a Monaya interview soon!! God Bless U!

+ 3
9 years ago eagerly Waiting for March to come sooon! Mohiy and Sanaya luv u both a lot!

+ 3
9 years ago Someone plzz tell me who is casted against Mohit in Khamoshiyan..I mean who is da lead actress ??

21akluvmonaya 9 years ago waiting for khamoshiyaan only n only for our baby mohit...plzzz confirm it soon mohit!!dying to see u back onscreen...
loveee u forever mohit...u rockkk man..!!!

9 years ago gud news is dat mohit will b coming back...yiepee

waiting for your come back baby

+ 2
9 years ago I just LOVE the name of this show, the concept sounds good not too sure about these actors, just can't wait to see Mohit back onscreen as a NRI.