The scene is straight out of a nightclub. Disco lights, loud music, dancing youngsters and to do the honors - DJ Suketu who was the special judge of the week. K for Kishore takes on a new hip-hop look with remixes this weekend. 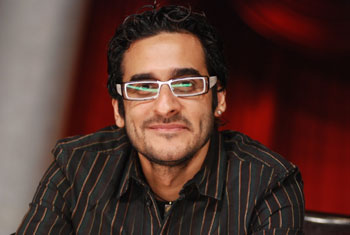 Featured Video
Amit Kumar, son of the legendary singer, informed all that Kishore Kumar never liked remixes and neither was he personally in favor of remixes. "I think remixes have ruined some of the best melodies. In fact, they should be relegated to the dust bin!", he said without mincing words much to the chagrin of Babul Supriyo who has many remix versions to his credit. There were awkward moments for both Nagesh Kuknoor and special judge DJ Suketu seated beside him. Nagesh confessed he did not like remixes at all while Suketu took pains to explain that thanks to god remixes vintage songs which would otherwise have been forgotten with time have become popular with the younger generation and also provided a platform for many singers. Once all parties agreed to disagree the evening proceeded without a hitch!

All the contestants sang a remix version of a popular Kishore Kumar number. K Shailendra sang Rimjhim gire saawan… while Arnab Chakraborty sang Waada karo… Both performances had the judges warming up to the remix versions. Chintan Bakiwala's Aise na mujhe tum dekho… and Chetan Rana's O saathi re… further impressed the judges. Amanat Ali's Tum bin… and Nayan Kumar Rathod's version of Keh doon tumhe… had the judges enjoying the new versions. By the end of the evening everyone who had reservations about remixes were ready to eat their words!

A fun filled episode that will have both the young and old tapping their feet, this weekend. K for Kishore has not only revived the nostalgia of Kishore Kumar's hit songs but also brought him closer to the hearts of all those young people who are now dancing to the beat of his evergreen numbers. In fact, this special episode builds a bridge across generations.

Do not miss this episode aptly called "Guru ka naya andaz" that makes a song and dance of Kishore Kumar numbers!

Catch it all on K for Kishore this Friday, March 28 at 9.00 pm on Sony Entertainment Television.