Ratna Sinha’s Babul Ka Aangann Chootey Naa has been ruling the TRP charts as the #1 fiction show on Sony. 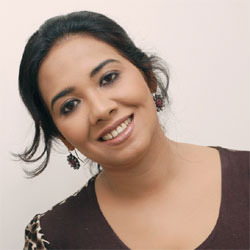 After the success of this show, Producer Ratna Sinha’s Chota Ganpati Telecreations is all set to come out with a new venture for a new channel, and this time it will be a romantic comedy.

Giving us details is our well-placed source, “The show is based on a metro city and is on the lines of a romantic comedy thriller and is tentatively titled ‘Jodi Kamaal Ki’”.

Similar to the lines of Babul, this show will also witness some fresh faces. “Ratna is eyeing on casting new faces for this show. The hunt has begun and very soon the serial will take to the floors”, reveals our source.

“The show will occupy a prime time slot somewhere between 8PM and 10PM. The producer promises that the serial will be an out and out comedy tickling the funny bones of the viewers”, adds our source.

Let us wait and watch whether this ‘Kamaal’ of Ratna Sinha creates euphoria with the masses!!

ksang_gal 12 years ago ranbir kapoor..can't get any other beautiful girl?

shruti 12 years ago Wish her all the best for her new project!!

looser01 12 years ago Dear Ratna,
You are going to give the strongest comp to Ekta go for it I miss KIT after its abrupt end we have nothing funny to watch and please bring Dimple Akash Aditia Bhaiya shanta bai I loved KIT lokking forward to you making another good serial!!!

Sonu_usa 12 years ago Ratna sinha & Rahil Azam have contributed 80% of the success of Babul
10 % goes to dadaji & Anushka.

My opinion--
Ratna sinha has enough calibre to beat Balajee.

Ratna Sinha & Rahil Azam make a gr888 team together.
They both have good outlook & exposure to life.
The show became controversial due to some bad elements insecurity few within the unit & some outside.
My opinion they both have the strength to overpower any situation...rather than compromising to situations.

Looking forward to the new comedy.

-AMIGAIL-LOVER- 12 years ago I LIKE RATNA BECAUSE SHE HAVE DONE THE BEST SERIAL BABUL!! IN WHICH CHANNEL WELL IT AIR??

Dharmesh to judge Dance Deewane alongside Madhuri Dixit and ...

exclusive
Exclusive Nishant Singh Malkhani reveals how he cried on his last day of ...