'All that glitters is not gold', and this proverb seems to suit the lifestlyle of our very own television actors, who simply do not have time to socialize and enjoy life in the midst of their hectic shooting schedule!! This is exactly what happened to Tapasya aka Rashmi Desai recently, although it was in a funny manner. 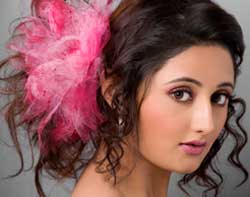 An insider tells us, "Rashmi was having one of those rare off days and was really thrilled with the shopping plans she had made for the day. She got into her car with an idea of shopping at Lower Parel. However, she did not instruct her driver about anything as she was busy talking to her friend on phone. After finishing her call, the other wise fatigued Rashmi dozed off without telling anything to the driver".

When Rashmi was woken up by the driver, she literally had a shock!! Guess why?

Our source further adds, "Unaware of Rashmi's day off, her driver who was accustomed to her daily routine took her to Filmcity, the sets of her serial Uttaran. When they reached the place, he woke up Rashmi and she was shocked to see her sets and for a moment she thought it's a normal working day".

We hear that Rashmi was so much disappointed that she got into a small argument with the driver, after which they drove to Lower Parel to shop. However, in all this confusion, Rashmi had lost out on some valuable time of two hours.

When contacted, Rashmi Desai with a hearty laugh avered, "Please don't even remind me of the day. Firstly I had taken the leave for a very important work which I couldn't complete, due to which my father scolded me a lot over the phone. And secondly I had to face all the embarrassments for dropping on to the sets, that too on my day off. So it was a disastrous day for me."

Guess Rashmi will have to be extra careful the next time!!

10 years ago She was so cute in ZND season 2. She was one of the best dancers there and I loved her KANK dance sequence with Siddhesh.

+ 4
10 years ago Rashmi is hilarious, she's so funny...loved her on ZNKD2 especially how she kept making fun of her weight

RASHMI U ROCK N WE ALWAYS LOVE U AS TAPU

10 years ago Father scolded part was awesome. Wow TVstar too spend normal life like us!!!

10 years ago really funny.....imagine landing up at your workplace when you have coaxed your boss/ultimately got a day's off.....