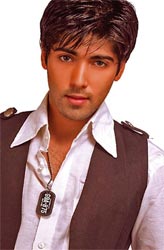 Rajan Shahi's Sapna Babul Ka Bidaai on Star Plus will see some major high points in Ranveer aka Kinshuk Mahajan being jailed in the coming episodes.

According to our source, "Sadhana (Sara Khan) and Ranveer are at a mall when a very unfortunate incident happens, and Sadhana is subjected to eve teasing by a mob of men. This is when Ranveer tries to save her, and in the struggle ends up killing one of the guys. Ranveer's jail stay will have an impact on the relationship of Sadhana and Ragini which will further get strained".

"Though the complete track has not been finalized, it is speculated that Sadhana for some reason does not side Ranveer in the court case, which leads to him serving more punishment. If this track is proceeded with, then there is every chance of the track moving to yet another high point wherein Ragini suffers a miscarriage due to shock", further informs our source.

We tried calling Rajan Shahi, but he remained unavailable.

It looks like there is going to be some high voltage drama in the show...

13 years ago Oh please dont do that.

Sadhna and Ragini has the purest relationship in this show. kaushalya tried to break it but its unbreakable bond.

There woudnt be fun to watch this show if sisters arent together.

Sadhna had many problems so please for sake dont bring her more problems because during those problems only ragini helped her.

If they are separated then the storyline will repeat from vasu and amika. wont it?
what wud be the different?

you will lose many viewers if this track is proceded and this show will end with poor TRPs and bad impact on viewers.

please dont do that. We all beg you for that.

13 years ago oh dnt seperate the sisters! thts nt gd! i luv their relationship! plus sadhna has already been through enough! and putting ranvir in jail and ragini loosing her baby! nt nce!

LoveKinchuAngu 13 years ago WE want kinshuk to be in bidaaii..
hate this jail crapp no wayyy..

zarazara 13 years ago Sadhan already suffered a lot in her life. Please don't make her suffer more. I was only watching the show because of her being happy. And Alekh is already ignoring her. Please don't separate the sisters and give some life to Sadhna.

13 years ago i wish the way rajan shahi treating ragini/ ranveer so badly in his serial his all shows should flop.

+ 2
13 years ago Exactly stop dissappointing us now for godsake Stop sidelining teh Main n Hit ppl now
I gues u still dont know how much ppl arecrazy after Kinshuk N Parul...Was only watching Bidaai for thm and now wow U Will send him to Jail n completely sideline him
thn just want to say MY Finall Bye Bye to Bidaaii