View Profile
All fans of the hazel-eyed beauty are in to face some disappointment. Rani Mukherjee has de 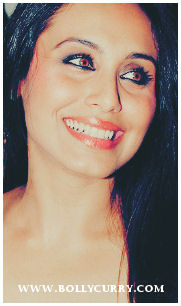 cided to opt out of the Cannes Film Festival this year due to her father not feeling well.
Rani was all set to grace the event with ace designer and friend Sabyasachi Mukherjee, to the point where she had even decided what she was going to wear. While others chose to don on western outfits, this husky-voiced actress wanted to make her fans happy and finalised on wearing a saree on the global red carpet, thus picking a Sabya saree for the mega event.
However, things did not go as planned as Rani informed Chivas that she couldn't make it to the festival due to the ill health of her father. She apologized for not being there, citing that she couldn't leave her father in his time of need. This would have been Rani's first time gracing the festival on May 18th.
While her fans face disappointment of not seeing their favorite actress at Cannes, all we can do is hope to catch a glimpse of her soon on the big screen! BollyCurry also wishes her father a speedy recovery!

Phones of Deepika, Rakul, Simone & Karishma Seized By The ...
2 hours ago