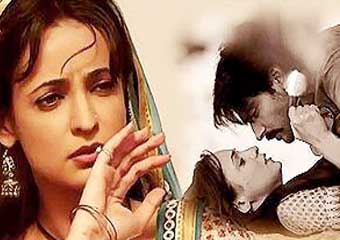 Monday to Friday 9:30 pm on Colors

The story of Rangrasiya is set in a village known as Birpur situated at the border of Rajasthan which is ruled by Thakur Tejawat Singh (Tarun Khanna) who influences the village people against the security forces Bhartiya Suraksha Dal (BSD). Every year he takes the responsibility of marrying off a girl from the village to a boy from across the border and in the process smuggles arms from them in exchange of money. Parvati (Sanaya Irani) is an orphan girl who has lost her parents in a firing which she believes has been the BSD handiwork but in fact it is the Thakur's men who have done it. It is her turn to get married to a guy from across the border but the BSD gets a hint of the smuggling and are about to catch hold of Thakur.

Rudra Pratap Ranawat (Ashish Sharma) has a troubled childhood when his mother has eloped leaving him and his father and since then he hates girls. Laila (Ankita Sharma), a nautch girl with negative shades is in love with him. Rudra and Pravati have a minor chance encounter as kids when Parvati hands him her doll when she sees him crying. They meet again as adults but in unusual circumstances when Rudra who is now a BSD officer saves her from goons but Parvati with her recurrent nightmares about BSD officers is terrified in his presence since the Thakur has always instilled hatred and fear about them and Parvati has grown up thinking that everyone from BSD is bad.

Even as the BSD fast catches up on the Thakur's wrongdoings, Parvati is married and is all set for bidaai. 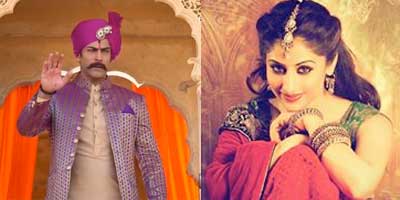 The different style of story is what gains an upper hand with each scene being wait worthy. The Rajasthani background and setting with perfect locations chosen for the shoot making it look genuine is what makes the show stand apart. The show so far has been shot in the deserts and the outdoor location, camels, etc., lend it an authentic touch.

Amongst the actors Sanaya Irani who has earlier always done urban characters, has adapted well to the Rajasthani avtar. She looks pretty and delicate as ever in the traditional attire with chunky jewellery to match. Ashish Sharma's portrayal of Rudra is subtle yet impactful and he makes quite an impression in the action scenes. The tall, good looking, dimpled Tarun Khanna is notable and makes his presence felt. Ankita Sharma apart from being a noted actress is a music and dance exponent and is perfect for the role.

The background score by Ashish Rego is haunting and apt. The action and fight scenes by action director Amar Shetty add to the thrill factor of the show.

Sanaya Irani looking innocent as ever is a natural beauty and she would have looked beautiful even with less or subtle make-up, just enough to highlight her stunning looks. While it is okay to glam her up a bit for the wedding scenes, the scenes where she gets up in the morning with heavy make-up or when she is at home it looks odd.

While we agree that the show is set in the interiors of Rajasthan the sprinkling of Rajasthani language is a bit too much since it is ultimately a Hindi show. It is difficult to understand what is being said and sometimes even the actors look as if they are making extra special efforts to speak the dialogues.

The show will definitely be liked by those who were waiting for something new to watch other than the family dramas. Rangrasiya with its raw, earthy touch can fill in that desire but only if it stays away from getting typical in the future.

So far, Sanaya and Ashish have shared just couple of scenes together on the show and they look good too. Their chemistry needs to be explored more and once their love story takes shape it will be able to generate more interest and keep the audience glued to the show.

Haridas 5 years ago We miss badly the one who gave life to RUDRA of Rangrasia. Ashish Sharma
eagerly waiting for your upcoming show. Wud be great if Sanaya Irani be the female lead.

YuSiAi 6 years ago Miss Rangrasiya so much. Wish Sanaya Irani and Ashish Sharma act in the same show again

gretalewis 6 years ago Perfect. Every actor in this series is outstanding!!! And the best part is that they work together as a team making it believable!!! Kudos to the prod house for taking the risk of being different

chandradg 6 years ago its a good show,all actors doing a splendid job,RUDRA is too good nd ofcourse MAUSAM AUNTY is jst SUPERB.

LyssaPie 6 years ago LOVE IT SO MUCH! WELL DONE TO SANAYA IRANI AND ASISH!

crazyal 6 years ago So far so good, I don't mind the cliched scenes, they had me when they cast Ashish Sharma as RPR, because his sexiness is not manageable! :)


i love this serial sooo much