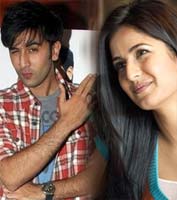 Katrina and Ranbir were shooting on the sets of Rajkumar Santoshi film, Ajab Prem Ki Gajab Kahani in Madh Island. The duo was acting out a chase sequence where they were hounded by the goons. The scene demanded Ranbir to turn around and hit one of the chasing goons.


The shot would have had a photo finish only that Ranbir's blow landed on the wrong face! In an accidental miss he happened to hit Katrina. An unintentional blow from Ranbir left Katrina bleeding nose.


It is known from the sources, Ranbir immediately apologized to the actress, but she took no offence because she knew the blow was not intentional. However, delicate Katrina was hurt and had to be given first-aid on the sets.


Rajkumar Santoshi was so very worried that he called off shooting for the day. Even the next day, too, Santoshi did not shoot the film but used the free time to do some decoration on the sets.
Featured Video