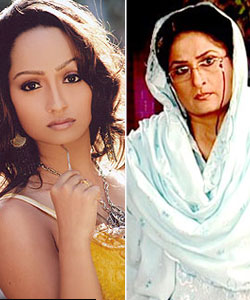 Shakuntalam Telefilm's Na Aana Iss Desh Laado on Colors recently saw the entry of a powerful character of Rana played by I. M. Mehta (fame A Wednesday); a character who pose a threat to even Ammaji (Meghna Malik).

The latest we hear is that Rana's family will be introduced in the coming episodes along with a social message.

A source spills the beans, "Rana is portrayed as an evil character that favours female infanticide and even keeps a keep in the family in spite of having wife and children. Janvi Sangman last seen as Beeji in Star One's Geet Hui Sabse Parayi will portray Rana's wife and Shabana Mullani, fame Bidaai will essay Rana's keep, Chandrakala."

Talking about the social message an informers says, "The show will bring into light the issue of female infanticide and the dipping ratio of girls compared to the of boys."

We contacted Janvi Sangwan who merrily chirps, "My character of Thakurain is of a villager who always accepts whatever her husband does and says. She has no rights to raise her opinion and voice against her husband having a keep in the same house."

All our efforts to reach Shabana Mullani were in vain.

Janvi and Shabana have already started their shoot and will enter the show in the coming episodes.

9 years ago biji in other show , good for her, Geet is best show ever

+ 5
9 years ago best of luck to Janvi Sangman...hoping to see her in a different avtar than in GHSP

9 years ago All d best to Janvi Sangman...this character is quite different from beeji's character