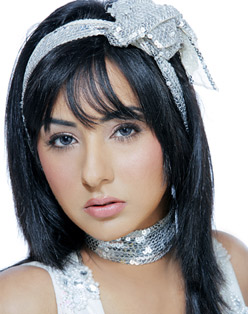 Model turned actress Sakshi Gulati who’s making her debut with Ram Gopal Varma’s Contract was been advised by Ramu to watch all his previous films to get into the skin of her character which is about an underworld don. Her character needs to incorporate many action movements and for that reason Ramu beforehand wanted her to be acquainted with his style of action. For that Ramu wanted her to watch the action scenes performed by the hero in his old blockbusters like Satya and Company. But the fading director, desperate for a hit, made sure that this young gal doesn’t get influenced by his recent disastrous films.

“I was advised by Ramuji to watch films like Satya and Company and notice the characters very carefully; especially those of the boys. In fact I went on to see many other Ramuji’s films like Rangeela, Bhoot, Pyaar To Hoona Hi Tha and Shiva (Nagarjun's). But Ramu strictly instructed me not to watch Ram Gopal Varma Ki Aag. Apart from those films I was also asked to avoid James and Go,” explains Sakshi.

It seems Ramu was worried that if this new actress watches his Aag then she would indeed Go away feared not to be a part of any other Ramuish game.
Featured Video