'Rama Rama Kya Hai Drama' will soon hit the theatres. The film starring Anupam Kher and Rajpal Yadav may entertain the audience, but the album has nothing exciting to offer. Siddharth Suhas has packed in 10 songs, including four remixes. 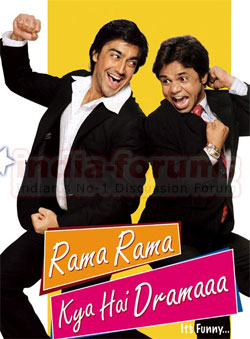 'Dekha tujhe sau martaba' brings KK back to the limelight. He renders the number with the same enthusiasm and passion that he does when it comes to modern, soft rock. Siddharth Suhas has composed the track well. The effervescent musical arrangements and the lyrics, penned by Kumaar, complete the promising number.

Alisha Chinai figures next with her bubbly yet sensuous rendition in 'Khwabon Se Nikal Ke'. Siddharth tries to woo music lovers by using 1960s-70s style of music in this composition, which makes is likeable. Otherwise, there is nothing interesting in it.

Next is 'Yeh faasle'. Thanks to the number that is presented in three versions, Siddharth can be sure of being known better in the industry.

'Laija laija' is a down-market item number with no class and irritating arrangements. It is an avoidable track in which nothing seems to work right. Singer Khushboo Jain should have rendered her voice for a classier item. She is the only positive aspect of the composition.

Finally, we come down to the title track, 'Rama Rama kya hai dramaa', which wrecks the already messed-up album. While lyrics sound outrageous, Adnan's rendition is rather weak. The overall music is blaring, bad and forgettable.

Starting off on a promising note, 'Rama Rama Kya Hai Drama' gets lost midway. The remixes, good or bad, seemed unwanted while only a couple of tracks hit the jackpot. And while Siddharth Suhas has done an average job, he would have to work hard to be the boss in the music industry.