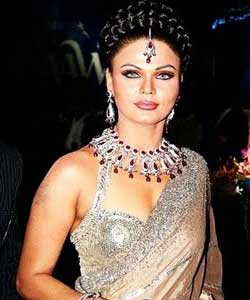 Rakhi Sawant who is popularly known as 'Media's favorite girl' is reported to have given a tough time to the media in Delhi during the launch of her show on Imagine, Gajab Desh Ki Ajab Kahaaniyan.

Our source says, "Rakhi Sawant kept the media people waiting for more than two hours at the launch of her show and the reason why she was away from media was that the saree which she was going to wear got stolen".

Rakhi who is very conscious about her look didn't want to come in front of the media in any other attire other then the planned one.

However, we hear that she was forced to grace the event and address media when most of the media gathered decided to walk out.

Must say, Rakhi knows the art of staying in the limelight..

This woman looks like a mad cow or crow who is upto no good!
Pehle khud ka insaaf kar lo then do other people's insaaf!

riahdas 9 years ago The show is about weird and wonderful stories from around India. Hopefully she'll balance listening and being crazy on the show. Whatever people say about rakhis appearance no doubt she'll be entertaining. I see this show as asoon to be guilty pleasure:)

Nikhi. 9 years ago What is this show actually about?! I saw the promo for the first time yesterday, and I still have no clue what it's about!

yipee 9 years ago saree got stolen? lol...rakhi and controversy go hand in hand

seriously...is she d only way for imagine to gain trps???how many shows have v seen about her in d channel already???makes d channel ppl seen so desprete

krnagu 9 years ago Rakhi is bothered about her looks???? great joke!. SHe looks like a devil always. who watches this dirty lady and her senseless dramas. NDTV is behind this dirty lady. It shows how much cheap the NDTV channel is!.

Vishal Bhardwaj on How People are Trying To Malign Bollywood ...
10 hours ago

Sunny Deol To Make a Netflix Project With Son Karan Deol?
10 hours ago