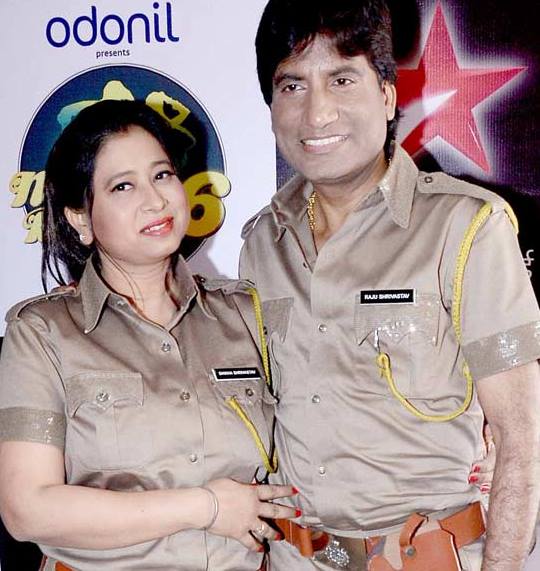 Raju Shrivastav along with wife Shikha was the most entertaining jodi of the show, will not be seen on the dance floor anymore as the duo have been eliminated from Nach Baliye.

Rajus Shrivastav and Shikha who were not trained dancers showed a commendable improvement in each and every episode of the show so far. They entertained the audience as well as the judges with their dancing skills too. Raju and Shikha were known as a complete package as they were entertaining the audience and proved themselves as good dancers too. But as we know that each week a jodi gets eliminated from the show, this week we will see Raju and Shikha getting eliminated.

Last week we saw Bruna Abdalah and Omar Farooque getting eliminated and this week we see Raju Shrivastav and Shikha exiting the show. With each level of the dance reality show getting tougher and tougher, which jodi's will reach the finale and take the trophy home?

KaranSG_01 6 years ago Finally!!!!
they should have been the first one to get eliminated.
i hope next in line are kiku and priyanka.

_mahi_ 6 years ago Stop posting elimination spoilers in the titles.. you guyz are annoying as hell.. if this happens one more time, I am going to boycott tellywood articles..

IFrozenl 6 years ago Glad they are out!
Bruna and omar were far better dancer than them!

Ramisaa 6 years ago finally
now kick out that motu sajid too :@
we want a dancing show not a comedy show that to with that **** sajid :@ :@

silvermoonlight 6 years ago "The credibility of the site matter to us, and the comments in bad taste tend to invariably hurt the actors/production house/channel etc."

When someone like myself who watches the show to find out!!!!

You did the same last week as well.

Please have some consideration!

meriyaar 6 years ago Jeez, finally!
They should have been the first to leave. They weren't awful but other deserving contestants left too early... too much unfairness on this show!
Hope it's kiku next week.