Beendh Banunga Ghodi Chadhunga, Imagine's new show which is to be produced by S. Farhan and Endemol India will have an open-to-public premiere at the famous Rajmandir Talkies in Jaipur tomorrow. It's a first for Indian Television when it comes to organizing the premiere launch at a known theater, that too wherein the entire Jaipur has been invited. 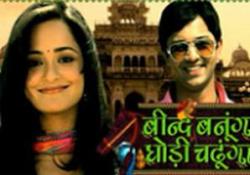 Talking about it, our source states, "The idea came from the Producer and Writer of the show, S. Farhan. Since the show is primarily shot in Jaipur, the makers wanted to involve the local people in the premiere. The channel has been campaigning aggressively for the past few weeks in Jaipur and the whole of Rajasthan. There will be contests held in the premiere and passes have already been provided. The Rajmandir Talkies can host as many as 1200 people, and the channel and production house expect a full house at tomorrow's premiere launch".

When contacted, Producer S. Farhan confirmed that a big scale preparation has been on for the premiere launch of the show at the Rajmandir Talkies, Jaipur. "We expect a full crowd to be there as we have invited the whole of Jaipur to be part of the big day. The entire cast and crew of the show will be present; I will be there with my Director, Vijay Chaturvedi. The channel PRs will also be gracing the event".

Talking about his debut show as Producer, Farhan states, "Beendh Banunga Ghodi Chadhunga is a simple story told in a nice way. It is a light-hearted soap with a humor quotient. All the characters are very interesting, the stand out being the one that Nausheen Ali Sardar portrays. The hero as you know is a guy who has shades of humor in him. He is not at all focused and serious in life while the girl has a set goal to achieve. We would depict the varying personalities of the leads, and will also deal with the importance of girls being educated in today's age".

Much-Delayed Fourth Season of 'Fargo' Gets a Premiere Date

_KAYNAAT_ 9 years ago imagine has gone 4 a toss wat sort of sows they r producing now only shanidev can come 2 their rescue i guess...

HaHaHeHe-Hupp 9 years ago i m thinking who will watch such shows????

HaHaHeHe-Hupp 9 years ago not a bit excited to watch ds crap any more , looks like from now on imagine should replace its name by baraati channel . i m not able to understand what happened to ds channel?? it brining such shows which already seem off air . i m pretty sure all of those would not go long , may be end with in two months.....

-DE- 9 years ago Imagine TV imagine karte rehete hain!! They never do anything

Pirated_Fun 9 years ago Imagine go to hell . I officially declare that i hate this channel which was my favorite when it started

From Sid, Bunny to Ved, Barfi: Life Lessons that Ranbir ...
51 minutes ago