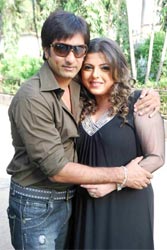 Real life couple Rajev and Delnaz Paul will be seen together in SAB TV's Shree Adi Manav, along with seasoned actor Kishwar Merchant.

According to our source, "Rajev and Delnaz play a couple in the show. Rajev wants to get a hold on Delnaz's property, hence gets his wife kidnapped by Shree, Adi and Manav, who commit this crime to repay their loans. However, there is a twist in the tale as Rajev does not want to get back his kidnapped wife, as he is in love with only her property. Above all, the guy happens to have an extra marital affair with his secretary, played by Kishwar Merchant".

When contacted, Rajev confirms the news and says, "This show is very special as I am working with Delnaz, after a long time. The track is very funny wherein I get my wife kidnapped. We will be seen along with Kishwar Merchant for two episodes. It is a very nice feeling to be part of  Parritosh's show, as he is a good friend".

Rajev and Delnaz were earlier seen together in Nach Baliye and Hans Baliye..

The episodes will be aired on December 11th and 18th on SAB TV.

+ 2
12 years ago They were also seen in Karam Apna Apna but later disappeared!!!!