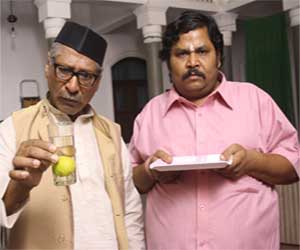 One of the most popular comedy show Chidiyaghar, which is coming on SAB TV, has gained a lot of fan following in the past few months of its launching. The most popular characters of the show named Gadha Parasad, Ghotak and Mayuri have become successful in getting a huge fan following since the show is on air.

Among all these characters, a character named Rajendra Gupta, who is playing the role of Bauji in the show is always keep running away from his servant Gadha Prasad's stupidities onscreen. Recently he was seen chasing with the same stupidities in his real life also. He called for a lemonade (nimbu paani), while he was having dinner with his friends and family at a restaurant. A young boy, who was sitting next to his table, decided to serve him before the waiter could. He came up to his table with a glass of water and a lemon and he put the whole into it. While offering the lemonade to him, the young boy said, "Bauji, yeh lijiye nimbu paani". The young boy was a regular follower of the show Chidiyaghar and he was imitating Gadha Prasad's character at that time. Talking about the incident, Rajendra Gupta said, "All that I could say to that young boy was Hari Om the exact same way I react to Gadha Prasad's stupidities. It's great to see the love and appreciation that I have been receiving across India from various age groups."

According to a source, "Rajendra Gupta's reaction was hilarious while the incident took place. He was totally stumped by the kid's reaction. Being extremely kind hearted and rooted, he took that incident in great spirits and he also spent some quality time with the kid."

8 years ago That is such cute story! Good thing Bauji is very kind in real life just as in reel life!

+ 4
8 years ago Great going
Anyone would connect with these characters, actors are doing a fab. job & scripts are good

ankitBangalore 8 years ago haha.. really awesome.. will watch this show on SAB.. did'nt know about this serial..

8 years ago love this show so much... my 6 yr old also imitates gadhaprasad... specially eee... showing his teeth...

+ 3
8 years ago LOL, I love Gadhaprasad! Everytime he smiles showing all his teeth literally saying 'Heee' it makes me roll with laughter. Awesome show!

8 years ago Hahahahah...
that is really Great...
Happy that people r loving chidiyaghar

alekya. 8 years ago really i njoy a lot watching this show...