Bigg Boss runner up Raja Chaudhary is quite miffed with the media. He feels that certain electronic channels played around with the tapes of his appearance at Sanjay Nirupam’s party couple of days back. “They smartly looped my entry remarks with my remarks that I made later, to make it appear I was drunk and misbehaving. I was not drunk and just emotional”, he added. “This kind of action is not done. Henceforth I will take my camera man to all events and will play them and expose the media of their wrong doings”, states Raja. However he did add that at least one electronic channel did play his side of the story last night. 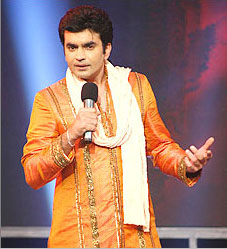 When we asked as to why he appeared agitated after coming out of Bigg Boss house on Saturday, and whether this anger stemmed from the fact that he lost, Raja quips, “No,  like I said, Ashu is my younger brother and he needed the money more than me.  I was bit upset as I could not locate my parents. You have to understand that after 90 days, I come out and see no one, obviously any body will be tense”.

About his future, he says “Endemol has discussed few projects with me, lets see”. Will you do a Bhojpuri film with Sambhavna Seth? “I am a professional, but she should not use that laughter of hers. I also abhorred her uncouth behavior in the house. She would light up in the loo and dump the cigarette butt in the toilet”, explains Raja.

While appreciating his fans’ concern regarding his temper he said, “I used my emotions as a self defense tool.  If I become smart like Rahul Mahajan, I would loose my own personality, right?”
In closing he says he would not mind getting remarried. “I would need a wife who would understand my work culture and give me space”, confides Raja.

Girlabouttown 11 years ago What is he doing? He has spoilt his image he made during the show......

chullbulli 11 years ago yes ...people shud not say that he was living off her wife''s money...being a fatehr and taking care of the house is no small thing...if prerna was managing the house financially .raja too was doing his duty...good luck raja...

mehak_kapoor 11 years ago Poor Raja. I like him. I hope he gets gud work

Source Reveals How Radhika Broke Set Norms of Hollywood: "An ...