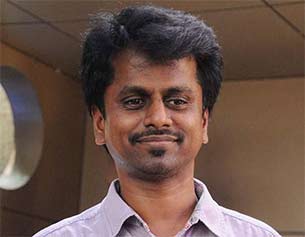 A.R. Murugadoss, co-producer of Tamil romantic-drama "Raja Rani" has refuted rumours that the film is being remade in Telugu. He says he is only planning to dub it.

"The Telugu dubbed version will hit the screens soon. The news about the film being remade in Telugu is baseless. It's a film for youngsters as well as family audiences, and therefore, I'm hoping it will be received very well in Telugu as well," Murugadoss told IANS.

"Raja Rani" reportedly minted over Rs.20 crore in the first two weeks of its release worldwide. It was adjudged a super-hit at the box office.

Starring Arya, Nayanthara, Jai and Nazriya Nazim, the film is a love story of a married couple who struggle to embrace the future because they can't forget their respective pasts.

The film, directed by debutant Atlee, was jointly produced by Murugadoss and Fox Star Studios.