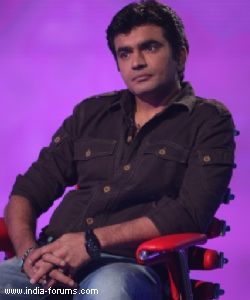 Raja Chaudhari has been in news for all the wrong reasons and after the dramatic episode with his ex-wife Shweta Tiwari, the man has been officially banned to enter the city of Mumbai. The latest we hear is that the actor is trying hard to make the court pardon his deeds.

A source says, "Raja had earlier applied to the Mantralaya asking permission to enter Mumbai city. But the appeal has been rejected and now he is appealing to the High Court to try his luck."

TellyBuzz contacted Raja Choudhary and he said, "Yes, my appeal to Mantralaya had been rejected and now I will be applying to High Court."

Let's see how the judgement falls for Raja...

Marz_Mahira_fan 9 years ago I hope this psycho animal is not only banned from Mumbai but he shud be exiled from India n shud rot some where in jail all his life...That serves him right...He is a piece of SHIT...Nasty man.Yeh insaan Shweta Tiwari ki jooti ke barabar bhi nahi hai...Bloddy Loooser!!

debarshi_genx 9 years ago He should be banned from the country itself!!!
Creepy psycho

Budtameez 9 years ago After the High Court rejects his appeal, he can try Supreme Court after that the Prime Ministers office where we are sure that he will succeed because lately it has come to light that the PM's office turns blind eye to bad behaviour and criminal activities opps!, that only applies to the Ministers...and so failing that he can petition the World Human Rights Court to stop Mumbai City from excising his God given right to abuse, torture and humiliate his EX-wife Shweta Tiwari... LOL.
THIS DICK-HEAD RAJA IS SO PATHETIC & TRAGIC THAT HE MAKES KAMRAN KHAN [BBH 4] SEEM LIKE A SAINTLY PERSON!

truerose 9 years ago I really feel he is a psycho or something.. He is too dangerous to be left off.. The authorities should lock him up in some mental asylum..

Norz 9 years ago y had to bring shewta in every article of raja ...

Faraan92 9 years ago I really dont understand y my comment is removed 4rm here.!!!
Will again say dat Raja chaudhry is piece of a Shit..

Nd they should never let him to enter again in Mumbai 4 da whole life.. Shweta should move on in her life nd should get relief 4rm such a cheap disgusting psycho..

yipee 9 years ago this guy really needs to get his life in order...

Arjun Bijlani talks about his first reaction on being ...
37 minutes ago