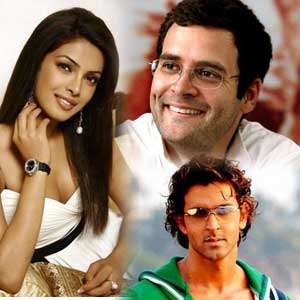 Congress general secretary Rahul Gandhi was named Icon of the Year, while actors Priyanka Chopra and Hrithik Roshan bagged the youth icon awards in the entertainment field at a glittering award ceremony here.

Rahul Gandhi, however, was not present to receive his award. Priyanka, who walked the red carpet, said being a youth icon meant a lot.

The awards are aimed to recognise and reward individual excellence and exemplary achievement in the genres of business, sports, entertainment, media, social welfare and justice and technology.

Aishwarya Rai Bachchan was graced with the Global Face of the Year award, while Deepika Padukone was named the Fashion Icon of the Year.