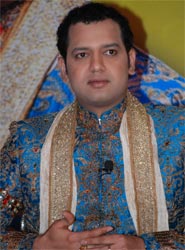 Rahul Mahajan is apparently very serious about his upcoming swayamvar which is to be aired on NDTV Imagine.

Nikhil Madhok, VP, Marketing  and Communication NDTV Imagine says  "Rahul, son of slain BJP leader Pramod Mahajan  has asked for kundalis of all the 16 finalists to be matched with him so that there are no complications later while he chooses one of te as his better-half. Rahul has even got the launch date of his show, Rahul Dulhaniya Le Jaayega postponed in order to schedule the final on an auspicious date as fixed by his astrologer," added the channel official.

But  Nikhil got defensive when asked whether Rahul would also do a Rakhi Sawant and go back on the wedding  promise. "Rakhi too wanted to get married to Elesh, but as you saw on Pati Patni aur Woh, differences arose between  the couple. Rahul is a different person and he will surely  follow his heart." He also tried to justify having such colorful personalities on the show by saying no other "single" celeb is willing to get married on national television as the format demands".

Let us hope that Rahul at least for the sake of Imagine, does find his Dulhaniya, else the channel will face a lot of embarrassing questions, a second time around.

JayshreeJ 10 years ago I hope this message goes to Rhul Before he makes his final choice of a bride. Its observation that Rhul comes across a very simple and nice guy and Nikunj Malik is very very negative, She loves dogs but has no respect for human beings, She always talking horrible comments on the other two contenders on a national TV , whats more her mother is also just like her,The last thing you need for you and your family is a vamp in your house and thats exactly how she comes acroos. Please dont think of getting married to her Rahul, it will be the wrost mistake you have dne till now. Your Mom and Grandmom have gone through a lot and cannot afford a negative daughterin law. Trust me.

-Rinki- 10 years ago Haha maybe there was no girl wanting to participate in the show!!:P

Gur.N.cool 10 years ago no one is going to watch it after rakhi and elsesh's debacle.

Another comedy show like Rakhi ka Swayamvar on the way!!!!

sweetassugar16 10 years ago ndtv imagine has the the most randomest shows :S


bte elesh was a gem person