Rahul Mahajan is pretty sure that he needs a life partner now!! As reported earlier, Rahul is now geared up to look for his perfect bride, the hunt of which will be aired on national television on NDTV Imagine!! 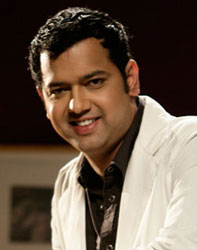 Featured Video
We recently saw the Swayamvar of the controversial queen Rakhi Sawant, wherein she got a match in NRI dude Elesh Parujanwala. Though the show Rakhi ka Swayamvar did not result in the much-awaited Swayamvar of Rakhi, the show did earn lot of recognition in terms of ratings, and was watched world wide.

According to our source, "The second edition of the show will be titled "Rahul Dulhaniya le Jaayega". Though the concept of the show will be similar to Rakhi ka Swayamvar, there will be certain changes incorporated based on what Rahul wants. The channel is very soon going to make an official announcement on the same".

Rahul who was part of Bigg Boss 2 is a divorcee who was earlier married to Shweta Singh, a pilot with Jet Airways. They parted ways after just 15 months of marriage.

With the buzz getting stronger that Rakhi Sawant has called off her relationship with Elesh Parujanwala, all eyes are now on Rahul Mahajan, mainly because he has also been a guy with a dubious past.

Will Rahul Mahajan walk away with his perfect bride, or will we see yet another namesake relationship building, are questions that will be answered in the near future.

+ 6
13 years ago they chucked away their hit show kitni mohabbat hai for this stupidity...i wonder wht is its trp lol

+ 3
13 years ago I guess NDTV has gone mad??? They are going to end same as they did for Rakhi ka swamyawar... Nothing they are making mockery of marriage....

+ 3
13 years ago lol..they changed da title
Rakhi mayya and Elesh were a fake couple though

+ 2
13 years ago wat crap is this...guys please tell me how many of you are going to watch this non-sense show:@