After Sambhavna Seth's exit last week this time it was her beta noir Payal Rohatgi to be evicted from the COLORS reality show Bigg Boss.

Here is the item girl in a candid conversation where she talks about the days of her captivity at the Lonavala farm house. 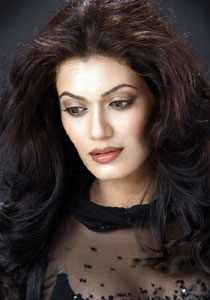 Featured Video
How was the experience of 8 weeks in Bigg Boss house?
It was both interesting and taxing. The biggest problem was that I was not able to talk to my mom due to which I broke down many a times. This house taught me how to nominate people and then act very friendly outside.

Can you give a clear idea of your relationship with Rahul Mahajan?
We are good friends and nothing else.  He was the only one who I was close to in the house. When he started ignoring me because of Monica, I just asked him the reason for such behavior. As a friend, I felt I needed to know the reason.

But there was talk about you and him getting cozy in the bathroom?
No, I used to go with Raja and Rahul inside the bathroom to wash clothes.

What about all the kisses and pecks?
That's the way we greet each other. I don't see anything wrong in giving each other a peck on the cheek.

Another allegation is that every thing is scripted in Big Boss. What do you have to say for this?
It's not true, how can you play games for 3 months??  Agreed that many things depend on how much you control yourself when you are aware that the camera is tailing you all the time. But even then sometimes you just forget about it. What you see is what really happens, when people loose their cool or just cry all alone.

Most people have attributed your closeness to Rahul as a reason for nominating you?
He is a friend so even if I have gone out due to him, it's fine. At least it's better than saying that Payal is a bad person.

There was a lot of talk about the swim suit and massages act?
Oh God, what do you expect me to wear for swimming?  And remember I had worn sarong. As for massage, I was tired and hence asked for massage from a friend, what's wrong in that? But Rahul being the naughty guy he is, starting playing around and then I had to stop him. I didn't want to embarrass him or my parents. It was not a big thing but the channel created a hype by playing it over and over again.

Your comments on Monica Bedi coming back as wild card..

It's good that she is back. I got an opportunity to clear the misunderstanding between us. Earlier I was responsible for her exit.  Now I hope this show helps her to go miles ahead in her career.

Coming to Sambhavna, she is talking about you a lot.
I don't want to comment on her as we all have seen her behavior.  She was never my friend and we come from different backgrounds.  But yes I do apologize to her for calling her cheap and down market.  I had said so in a certain context, when she was abusing me and getting into my case.  As for her badmouthing me, I don't want to get into that, rather I'll get back to my life.

It's said that you have been wearing make-up throughout.
I am now in front of camera and have I put on make-up. So what's the big deal? I want to look good and am conscious when it comes to being in front of camera.

Have you fulfilled your aim of coming into Bigg Boss?
Yes I did... I wanted the public and director to see me as who I'm, than in a mere glam avatar, which they did. I was cooking food and just sitting around in bandana. I wanted to portray different image as a girl next door as I am tired of looking good and the other tags that was given to me. I just wanted to try out other stuff as well. I was on a long break from my films and hence thought that this will be a good opportunity to re connect with my fans.

Who do you want to win?
Of course Rahul, I will vote for him.  At present there is big clash between Rahul and Raja.  The one who maintains his/her cool will end up taking home the prize booty.

verifyfor 14 years ago I feel Pooja Bedi grilled Payal unfairly whereas she let off Sambhs lightly. Between them Sambhs was unbearable . I agree Payal is not a very likeable person but she does not deserve this type of treatment. What is wrong if she wants to look good on camera? Somebody is spreading filth about Payal on Wikepedia. Wish Payal as a software professional finds out the IP address of the filth monger and sue for damages.

14 years ago Their relationship is anything but platonic!!!

14 years ago She is self obsessed, and need to get over herself.

14 years ago She thinks too highly of herself. A C grade actress does not have much fans. Wake up and smell the coffee girl.

14 years ago payal you look good, wish you all the best for your future

nidhika 14 years ago payal u r so pathetic nothing more than a dirty doormat for rahul n nothin else......open ur eyes girl......