Ammaji aka Meghna Malik in COLORS' Na Aana Is Des Laado has been subjected to various attacks in the past week, coming from her brother-in-law and son. However, there is a twist to the tale as Raghav (Aditya Redij) gets injured in one of the attempts. 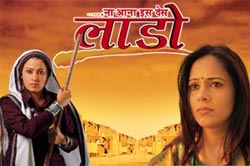 Featured Video
According to our source, "Raghav who is trying to find out the real culprit is injured by a gun shot".

The buzz is that there is a possibility of Raghav being eliminated from the show. However our source states, "Raghav is very much there in the show. It is true that he will be shot, but he will recuperate in quick time. We will also be focusing on the love life and marriage preparations of Raghav and Sia (Natasha Sharma). At the same time, the attacks on Ammaji will continue and will get bigger and bigger. A parallel track of Dheeraj-Jhumar love story will also be shown in the coming episodes".

We tried calling Aditya Redij and Natasha, but both were unavailable.

Aditya Redij I love u now miss u waiting for u...

So Sexy
So Handsome
So Mesmerizing
So Gorgeous
So Sweet
So Fit
So Talented
So Down To Earth
So Yummy
So Hot
So Cool
So Skilled
So Powerful
So Flexible
So Well Built
So Fantastic
So Cute
So Lovable
So Humble
So So So So So So So So So OMG Sooo Damnnn Good Looking!!!


Carry On!
What Did I Miss?

8 years ago love u

+ 5
12 years ago marriage prep of raghav and sia? but they r already married!